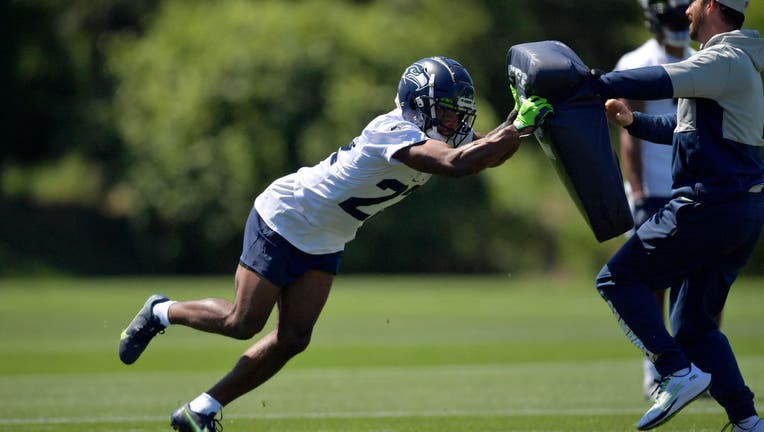 SEATTLE - Seahawks Training Camp is underway! Q13 Fox is your exclusive home for all things Seahawks.

Sports anchor Alyssa Charlston sat down with rookie cornerback Tre Brown to talk about what he wants the fans to know about him.

Read the transcription below:

Charlston: Alright time to get to know one of the new faces on the Seattle Seahawks, Tre Brown, cornerback, number 22 out of Oklahoma today. Welcome to Seattle. So far, some limited time with the team, but what has everything gone like compared to your expectations?

Brown: Man it’s a family culture. You know, I thought you know coming in as a rookie, sometimes know, you feel out of place, and I know like day one day two, I felt like I’d been out here for a while. It’s lovely out here man I love the culture out here.

Charleston: You wanted to know when you first landed in Seattle, best Hibachi place. Is that your favorite food? Like what is your go-to meal?

Brown: Yeah, I can eat a hibachi every day. What I get is the chicken and shrimp. And I’m a rice-head, you know, you can’t go wrong with that! It’s like, I feel like it’s a healthy way to eat.

Brown: Man, I respect his game, I respect a lot about him. He’s awesome. He don't care who’s up in front of him. He talks that talk, he can back it up as well. So I feel like I’m the same way you know, and so I know he’s gonna make me a whole lot better. We’re gonna be competing. Theres’ also another guy I've been thinking about and you know I’ve been prepping myself to go against, Tyler Lockett.

We’re from the same area, you know we know a lot of people. We know a lot of similar people. His family knows my family and stuff like that. He’s also good at his craft and him and D.K. are very good but they are very different. They’re the best duo in the NFL.

Brown: Nah I talked to Coach Pete about that he was like ‘Nah he’s gonna tear you, you gotta work up in the ranks for that one. ’ So I’m like you know what I’m just gonna leave it alone. If it happens it happens.

Charleston: For you, you always have that quickness in you. What do you think about, what do you need to focus on when you’re going up against a guy who’s 6’3, 6’4 6’5?

Brown: That’s a great question, you know because of the corner. If you think you get beat. So I don't necessarily think I just compete. You know things happen, you know I’m about to go out there and give it my all. It’s like I'm six foot three as well you know you go against some 5’9 guy or 6’3, guy but I don’t look at it like that.

Charleston:  Outside of you’re a hard worker, grinder, your gonna get your work done. What do you want 12s to know about Tre Brown?

Brown: Wow, put me on the spot right here (laughs). Uh what I want them to know about me, you know that I’m a fun guy. You know, I’m loyal and I’m always looking out for those, and I’m always gonna reach out to any 12 fan there is out there you know, anybody that comes to me for anything.

Charleston: Love that. So 12s if you see him in the grocery store, say hi to Tre Brown