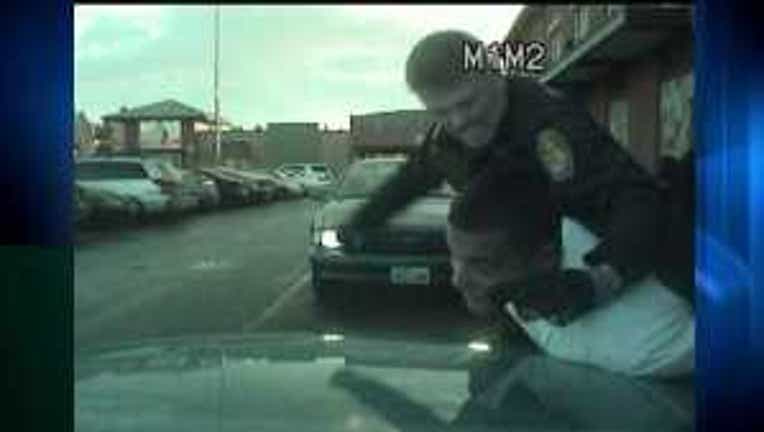 SEATTLE -- An “excessive force” complaint has been filed with the Seattle Police Department over the arrest of an 18-year-old man in December 2010 in which Seattle police officers are seen on dash-cam video throwing the man onto the hood of a car and one punches the man in the face.

The Seattle Police Department said the man had bit the officer’s finger hard enough to break the skin and the officer punched  him to get him to release the finger.

The incident started, according to police, because the man, Isaac Ocak, had left a car running outside of a department store in Westwood Village in West Seattle and a patrol officer was concerned it might be a robbery or a shoplifting incident in progress. As the patrol officer was investigating the car, an irritated Ocak returned and asked what the officers were doing.

Officers discovered Ocak did not own the car.

During a news conference, Seattle police also explained that Ocak had a criminal history and was flagged as an assault risk.

“As officers tried to contact the registered owner of the vehicle, the man repeatedly refused to follow officers’ directions to keep his hands on the hood of a patrol car,” Whitcomb said. “Because of the man’s potential risk to officers, police opted to handcuff him out of an abundance of caution, to ensure their own safety as they continued their investigation.

“The man, however, was not interested in being handcuffed, and struggled with officers, pushing away from them as they tried to get his hands behind his back. During the struggle, the man bit down on an officer’s gloved finger. In response, the officer struck the man, who then released his bite,” Whitcomb said.

Ocak’s attorney, James Egan, said, "This is not proper police procedure. This served absolutely no purpose at all for them to throw him on to the hood of the car."

But Whitcomb said, "The initial stop was constitutional and that the force that was used in the course of the arrest was reasonable and necessary to take the person into custody.”

Ocak was booked into the King County Jail for assaulting an officer, but the King County Prosecutor’s Office declined to file charges. The Seattle City Attorney’s Office filed charges, but later dismissed them.

But on Friday, after Ocak’s lawyer filed a complaint and the video was released, the SPD’s Office of Professional Accountability agreed to conduct a separate review of this case.

Professor William Bailey teaches pretrial procedure at the University of Washington. After seeing the video footage, he saw both sides.

"If they have enough probable cause to take him into custody," Bailey said of the officers, "then just do it. There was a toying back and forth that did not seem professional.”

But Bailey also said Ocak should have been more cooperative. "When you are placed under arrest, you have to cooperate,” Bailey said.