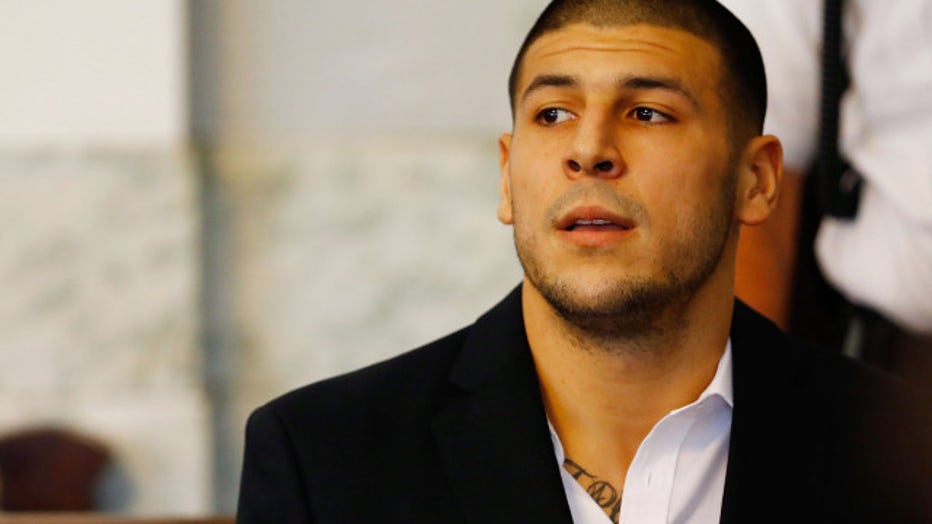 Aaron Hernandez sits in the courtroom of the Attleboro District Court during his hearing on August 22, 2013 in North Attleboro, (Photo by Jared Wickerham/Getty Images)

Hernandez, 24, could be arraigned as early as next week. He's currently in jail awaiting trial in a separate case: the 2013 slaying of a semipro football player.

"Mr. de Abreu and Mr. Furtado were ambushed and executed as they drove home along Shawmut Avenue in Boston's South End in the early morning hours of July 16, 2012," Conley said.

In addition to the two counts of first-degree murder, Hernandez also has been charged with three counts of armed assault with intent to murder and one count of assault and battery by means of a dangerous weapon, the district attorney added.

The latter four counts reflect shots fired at three people inside the car that de Abreu and Furtado were in, Conley said. One of the people in the car suffered a gunshot wound, he said.

Conley said that Hernandez was driving an SUV that pulled up alongside de Abreu and Furtado's car near the nightclub and that the former football star fired a .38-caliber revolver at them.

Hernandez has also been charged with unlawfully carrying the gun he allegedly used in the attack, Conley said.

CNN's calls to Hernandez's attorney were not immediately returned.

He 'may have been the shooter'

Confirmation that Hernandez was suspected in the Boston slayings came when documents were unsealed in court in January.

In those records, it is suggested that Hernandez was the trigger man in de Abreu and Furtado's killings.

"There is ... probable cause to believe that Aaron Hernandez was operating the suspect vehicle used in the shooting homicides ... and may have been the shooter," reads a June 2013 warrant that was part of the unsealed batch of records.

The warrant was used to search a Toyota 4Runner linked to Hernandez that, according to court documents, witnesses saw at the scene of the crime. The warrant gave permission to search for gun residue on the SUV, which was recovered at the home of Hernandez's uncle in Bristol, Connecticut.

In search warrant affidavits, investigators have said Hernandez and another man, later identified as Alexander Bradley, followed de Abreu and Furtado into the club.

The former star football player and Bradley are seen on security cameras together inside Cure Lounge and also driving an SUV that had been following de Abreu and Furtado when they left the club, according to court papers. Witnesses said that the SUV sped away after multiple shots were fired at the car.

In February, the de Abreu and Furtado families filed wrongful death lawsuits against Hernandez, with each family seeking $6 million.

At Thursday's news conference, Conley described the night that de Abreu and Furtado were killed.

By coincidence, Hernandez and another person entered the club at the same time, Conley said, adding that the investigation has not uncovered evidence that the two sets of men knew each other. Instead, he said, it seems that their "chance encounter" inside the club "triggered a series of events that culminated in these murders."

The victims left the club about 2 a.m. and drove away, unaware, the district attorney said, that Hernandez was driving behind them.

When the victims' car stopped at a red light, Hernandez's SUV pulled up beside it.

"Aaron Hernandez then fired a .38-caliber revolver multiple times from the driver's side of his vehicle into the passenger's side of the victims' vehicle," Conley said.

De Abreu, the driver, was shot several times and fatally hit in the chest, and Furtado, who was in the front passenger seat, was struck multiple times and gravely wounded with a shot to the head, the district attorney said.

Two backseat passengers escaped injury and ran from the car. A third man remained in the car and suffered a wound to his arm, Conley said.

There has been a focus on Hernandez since he was arrested in June. He was charged with first-degree murder and weapons charges in connection with the shooting death of 27-year-old semipro football player Odin Lloyd in North Attleboro, Massachusetts.

On June 17, a jogger found Lloyd's body riddled with gunshot wounds at an industrial park in North Attleboro.

Prosecutors have said that on that day, Lloyd was seen was seen around 2:30 a.m. with Hernandez and Hernandez's friends, Carlos Ortiz and Ernest Wallace, in a rented silver Nissan Altima.

On June 18, police searched Hernandez's home about a mile from where the body was found, and they searched it again on June 22. Days later, the football player was arrested and charged with first-degree murder for Lloyd's death. Hernandez also was hit with five weapons-related charges.

In court on June 26, First Assistant District Attorney Bill McCauley said that Hernandez "drove the victim to the remote spot, and then he orchestrated his execution."

"He orchestrated the crime from the beginning," McCauley said. "He took steps to conceal and destroy evidence, and he took steps to prevent the police from speaking to ... an important witness."

Hernandez pleaded not guilty, and a judge ordered him held without bail.

The NFL's Patriots then dropped the tight end from the team roster.

"It's pretty scary to hear that someone was on the street, in the public eye, and is such an icon, and now we learn that this is (allegedly) happening behind the scenes," she said.

After Lloyd's slaying, Hernandez continued to play football in 2012. During that season, he had 51 receptions for 483 yards and five touchdowns. The Patriots finished the regular season with 12 wins and four losses but won the AFC East Division.

At the June 26 hearing, defense attorney Michael Fee said that the evidence against his client was circumstantial and that bail should be granted so that Hernandez could return home to spend time with his fiancée and his then-8-month-old child.

"It is a circumstantial case. It is not a strong case," Fee said, arguing that Hernandez had cooperated with law enforcement and was not a flight risk.

While investigators worked, and the former football star stayed behind bars, the Lloyd case took several twists and turns.

Among Hernandez's jail visitors have been his fiancée, Shayanna Jenkins, and cousin, Tanya Cummings Singleton, both of whom face charges in connection with the Lloyd homicide, the court papers revealed in February.

Last October, Jenkins pleaded not guilty to perjury charges after prosecutors alleged that she lied to a grand jury and disposed of evidence.


CNN's Susan Candiotti and Laura Dolan contributed to this report.