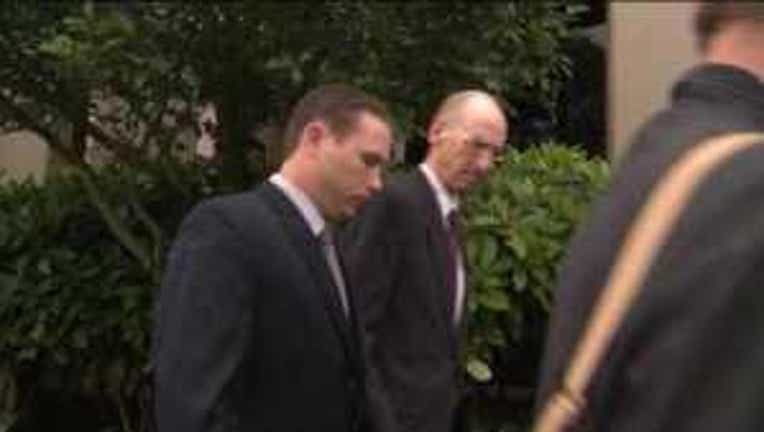 Former Lakewood police officer Skeeter Manos posted bail Monday after he was charged Sept. 12 with second-degree identity theft and forgery. The new charges came just weeks before he was slated to start a three-year prison sentence for embezzling money from a memorial fund for fallen officers.

Manos paid the court $10,000 in cash for his release, promising to return to the Pierce County Jail on Wednesday. Manos is restricted to Pierce, King, Thurston and Kitsap counties.

According to police, Manos stole the identity of a Certified Public Accountant and forged documents in his name while acting as treasurer for the Lakewood Police Department Guild in 2011. The theft was an effort to cover up his embezzlement, police said.

Manos was arrested Wednesday at the Great Wolf Lodge in Grand Mound. He pleaded not guilty to the new charges.

If convicted, Manos faces five years in state prison and a $10,000 fine. The charges come on top of Manos' previous sentencing in July to nearly three years in federal prison and $159,000 in restitution for embezzling money from the memorial fund and the Lakewood police guild.

Pierce County Prosecutor Mark Lindquist said investigators discovered the identity theft after Manos plead guilty to the embezzlement charges. He also said Pierce County officials want to make sure Manos serves time for all of his crimes if he is convicted of the new charges.

"It would be our intention to keep him here, to prosecute him here, to convict him here and have him serve his time here before he begins his federal time for his federal crimes," Linquist said.

U.S. District Judge Robert Bryan sentenced Manos, 34, of Dupont, to the upper range requested by federal prosecutors in the embezzlement conviction. Manos was fired from the Lakewood Police Department after his arrest in February. He pleaded guilty to the charges in March.

Manos diverted about $151,000 intended for the families to his secret account. He then used about $112,000 from the account for purchases at Costco, Home Depot, for Alaska Airlines tickets to Las Vegas, and for cash withdrawals at various casinos.

Also, in May 2009, Manos set up an account at Washington State Employees Credit Union in his name. Beginning in May 2009, Manos wrote checks from Lakewood Police Officer Guild accounts and deposited them into his WESCU account. Manos told guild officers he had purchased certificates of deposit with the funds. In fact only $55,000 of funds went to CDs; Manos embezzled $47,000 of guild funds for his own use.

U.S. Attorney Jenny Durkan said in a statement,“Skeeter Manos' betrayal runs wide and deep. He betrayed the families of the fallen officers, his colleagues in the Lakewood Police Department, and the community, which contributed to recognize the four who made the ultimate sacrifice. His greed casts a deep shadow, but it can never trump the honor and sacrifice of our fallen officers.”