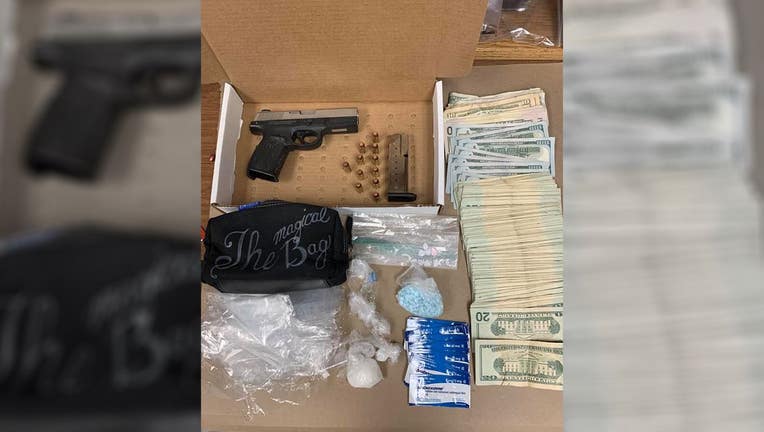 EVERETT, Wash. - Police have arrested a suspected drug dealer in Everett earlier this week, and recovered a loaded handgun, cash and an ample amount of street drugs.

According to the Everett Police Department (EPD), officers from the Anti-Crime Team (ACT) recognized a man who had an active arrest warrant at a local gas station. The ACT also knew the man had been convicted multiple times for illegally owning a firearm. When the suspect left the gas station on his motorcycle, undercover officers followed him.

Officers followed the suspect all the way to a Safeway parking lot in Shoreline. After parking his motorcycle, he took off running.

Authorities say the ACT and a few members of the Violent Offender Task Force (VOTF) in the area chased the suspect down, and brought him into custody.

According to the EPD, officers found out the suspect had a loaded .40 caliber Smith and Wesson handgun tucked into his waistband, and a bag full of fentanyl pills, meth, suboxone, other narcotics and more than $4,400 in cash.

In a Facebook post, the EPD wrote, "Great work by our ACT team and assist by VOTF!"

Police are warning parents about a new rainbow-colored form of fentanyl that has made its way to the Pacific Northwest, and can easily be mistaken for candy.