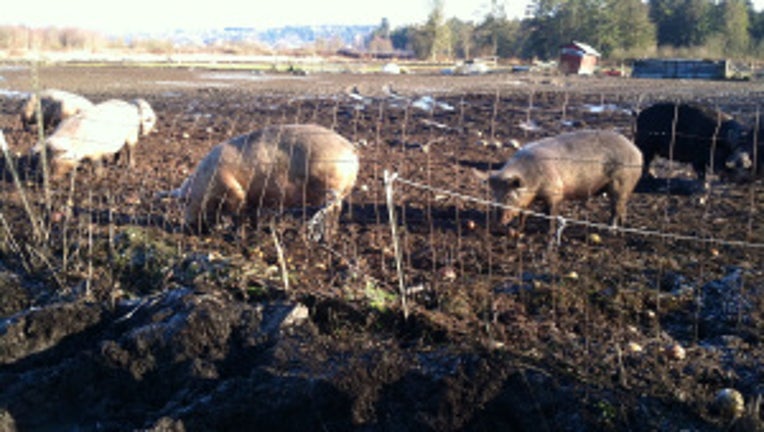 EVERETT -- Now that marijuana is legal in the state, farmers and others across Washington are starting to look into the idea of growing pot.

When voters on Nov. 6 approved the legalization of marijuana, the state began work on how to regulate and license grow operations and retail stores. It is expected to take more than a year before the rules and regulations are in place.

The owner of a pig farm on Ebey Island in Everett sees a lot of potential in adding a pot crop to his operations.

“Farming is a game of pennies,” pig farmer Bruce King said. “You don’t really make a lot of money at farming.”

King said pigs have been profitable, but growing marijuana could be a jackpot.

King said he’s never tried marijuana or any other drug, but now that pot is legal, he wants to be first in line for the permit to grow it.

According to the state Liquor Control Board, which is in charge of licensing and permitting the pot business, he’s not the only one.

“My phone rings every day,” the Liquor Control Board's Brian Smith said. “People have questions, or they want us to know they’re interested in being an applicant for one of the licenses.”

King's neighbor, Jennifer Dreewes, who has a horse farm, said she’s worried that a pot farm could attract a lot of people, especially criminals.

“We don’t want any of that down here,” said Dreewes. “This is supposed to be quiet; this is peaceful down here.”

King believes on his farm, pigs and pot can go hand in hand.

“It (pot growing) should be out where crops are grown, in the pockets of the farmers, and there’s no reason this revenue can’t help revitalize the local farming economy,” King said.