Some members of the medical community say Everett is one of the larger hot spots for meth addiction in the nation. Doctors say it's an everyday problem in the emergency room in Everett, with patients coming in who are suffering from meth addition and a host of associated impacts.

EVERETT, Wash. - Some members of the medical community say Everett is one of the larger hot spots for meth addiction in the nation. Doctors say it's an everyday problem in the emergency room in Everett, with patients coming in who are suffering from meth addition and a host of associated impacts.

But, there is hope: A new treatment program is being studied there that could produce a type of antidote that could combat addiction. The study is part of an effort to get the treatment approved by the FDA. It's still in the early stages, but so far it's been shown to eliminate the "high" for those on meth, giving them the chance to complete treatment and other programs to get their lives together.

"There is not a day in the emergency department where we are not treating someone on methamphetamine," said Dr. Tom Robey, Providence Regional Medical Center, Emergency Department.

The ER at Providence serves as a type of safety net for the community, a place where doctors like Robey regularly encounter people struggling with addiction and drug-related issues. At Providence, he's helping to facilitate a study on a new treatment for meth addiction. As part of the study, doctors are recruiting 40 people nationally, including several from the Everett area, as part of a national effort to get the drug approved by the FDA.

"The sponsors identified hot spots around the country where methamphetamine use is particularly challenging, and Everett is one of those places," said Dr.  Robey.

He says the treatment works by using monoclonal antibodies, which have already been tapped for a range of medical purposes, including the treatment of COVID.

"It’s like the COVID antibodies you’ve heard about that bind the COVID molecule and COVID virus, and/or bind the spike protein on the COVID virus and dismantle it," said Brooks Gentry, Chief Medical Officer, InterveXion Therapeutics.

The antibody is very specific for any type of amphetamine.   The graphic below, provided by Brooks Gentry of InterveXion Therapeutics, shows what the therapy looks like in action.  The nerve endings in your brain are represented in blue and the antibody is shown as a black "Y" in the graphic.  The meth molecules, in yellow, bind to the antibodies like a magnet.  The molecules are then removed from the body via the blood stream. 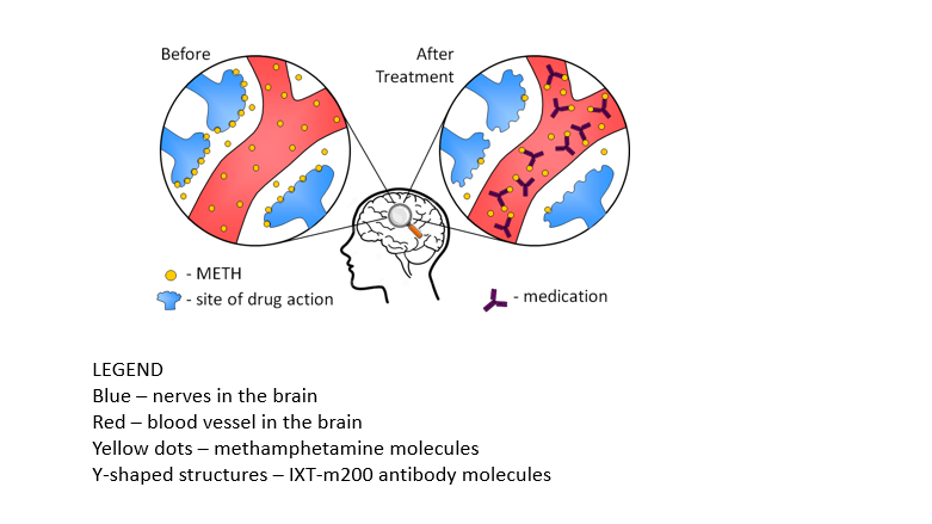 "Once it’s injected into the blood, it circulates and binds that amphetamine so tightly, that it pulls it away from the brain and moves it to the other organs that can help clear it out of the system," said Dr. Robey.

"In this situation, our medicine keeps meth from exerting its effects on the brain. It keeps the patient from getting high," said Brooks Gentry, Chief Medical Officer with InterveXion Therapeutics. "Or if they are toxic, we think in the situation of meth OD, it will reduce some of the toxic effects by removing it from its sites of action in the brain."

He says the meth then gets flushed out of the body through the liver and kidneys, through urinary excretion and liver metabolism.

The antibodies are administered through an IV.  Once the treatment is in the bloodstream, it remains there for almost a month.

So far, Dr. Robey says in the early stages of the study, the medication has been almost as effective as some of the anti-psychotic medicines that are used to treat psychosis and hallucinations, paranoia and anxiety.

"I was pretty skeptical that this medication would have any effect.  There just isn’t anything thing out there to treat meth and what I’ve observed with the few number of individuals who participated in the study is that within 30 minutes folks are feeling better," said Dr. Robey. "In many cases, Within 30 minutes or an hour of them coming in, receiving the treatment, they will be resting, maybe even napping, that’s how calm people get after receiving this drug."

Dr. Robey also hopes that Everett can lead the way in providing ground-breaking treatments like that to folks that might not have access to it otherwise.

"What has kept me really excited about this project is that the patients who receive this agent are coming back and telling me their lives have changed, they have gotten housing they have got a job, they have reconnected with family members.  These are the things that make it a joy," said Dr. Robey.

He says Sacred Heart in Spokane was also part of the study. Dr. Robey says it could take at least 4-6 years for the treatment to get approval for wide-scale use.  He's hopeful that it will one day be part of a comprehensive approach to tackling meth addiction.

"We got our first meth antibody grant in ‘97 or ’98, and it took us then until 2013 when we did our first clinical trial, human trial," said Gentry. "We are incredibly grateful to the NIH. It’s slow, but we’ve been at this for more than 20 years, that’s been our only source of funding."

Gentry says the most recent study will be winding down at the end of 2022.  He says that the data from the "OD study" will be compiled and presented next summer.  Other studies will remain ongoing including the OUTLAST Study which is operating out of several sites, including San Diego.