A wildfire burning near Yakima has grown to an estimated 52,000 acres (81 square miles) and residents of about 900 homes are under evacuation orders.

The dangers of flames and smoke continue to pose a threat to communities in Yakima and Kittitas counties, as firefighters work to contain a growing wildfire that started near Evans Canyon.

The fire spread across more than 52,000 acres, destroying five homes and several outbuildings. Residents of about 900 homes are under evacuation orders.

More than 440 firefighters are facing temperatures in the mid-90s, but winds are not as strong as they were earlier in the week when the fire grew rapidly in size.

Ginger and James Brand live north of Selah in the country—one of the several communities listed as a Level 3 Evacuation Area, meaning residents are required to leave for shelter. The couple left their home earlier in the week.

“Went back to check on the house and see if it was still there. And, we’re used to being outside, We work outside all day. The smoke was so bad I couldn’t hardly breathe,” said James Brand.

His wife, Ginger, said her neighborhood looked like Armageddon. 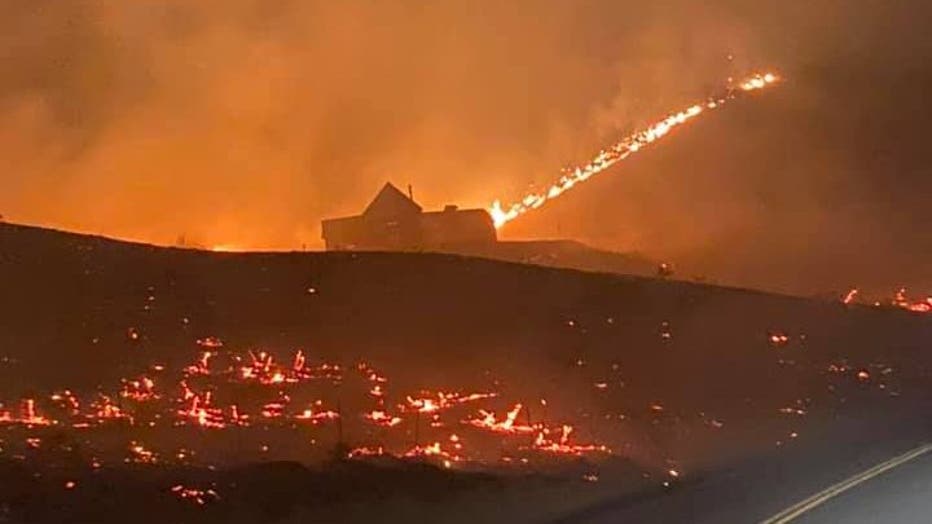 The couple parked their RV for shelter at the Central Washington State Fair while their two horses and mule are safe inside a barn at the fairgrounds. Kathy Kramer, president and CEO of the Central Washington Fair Association, said this is the time of year when they’re deep in state fair planning. Though it was canceled due to the COVID-19 pandemic – they’re still finding ways to serve families and their livestock.

RELATED: Hundreds told to evacuate because of Evans Canyon fire, but not everyone is leaving

More space in the RV lot and barns at the fairgrounds is available for those seeking shelter from the wildfires. The Brands said they were comfortable at the fairgrounds don’t plan to go back home until its safe…that is if their property survives the flames.

“If it burns, it burns. We have our family, our animals. If it burns, we have insurance,” said James.

While their animals stay in shelter, the couple said they are taking advantage of their time away from the smoke.

“Actually, it’s a lot like vacation because we really haven’t had a vacation for several years,” said Ginger.

The public information officers said firefighters prepared for an intentional burnout operation, Thursday evening. The planned event would talk place east of Mount Clemens in an effort to tame the wildfire. Officials said the event would look a bit dramatic and want people to be aware of the situation. Most people in Naches will see smoke from the burnout and along Old Naches Highway.