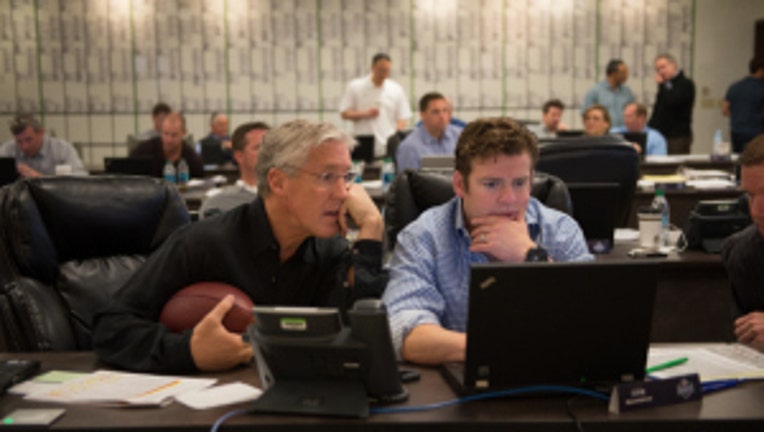 Pete Carroll and John Schneider working together in the Seahawks "war room" at the 2013 NFL Draft. (Photo: Courtesy of seahawks.com)

SEATTLE -- The post-draft power rankings are out at ESPN.com, and guess who remains at No. 1?

It’s the Seahawks, obviously, because they also held the top spot in the website’s pre-draft rankings.

Says NFC West blogger Mike Sando, “The Seahawks used the draft to get stronger at defensive tackle and, surprisingly, running back.”

Sitting at No. 2 are the division rival 49ers – the two-time defending NFC West champion and 2012 NFC champion 49ers, who also had a strong draft. Offered Sando: “The 49ers stocked up on draft choices for the future, but they also found an immediate starter in safety Eric Reid.”

We’ve already asked coach Pete Carroll how he plans to handle these heightened expectations for a team that used the chip-on-the-shoulder motivation – individually and collection – so well in going 11-5 during the 2012 regular season, won the franchise’s first road playoff game since 1983 and came within 31 seconds of advancing to the NFC Championship game.

“It’s really crucial that we handle it well,” Carroll said. “That reality, it’s really important to own that. … As the praise comes, we handle it with humility. You understand it and treat it like it’s no big deal.”