SEATTLE - The Aurora Bridge crash in 2015 is one of the worst transportation accidents in Western Washington. But the 42 plaintiffs in the civil lawsuit are claiming that it wasn’t just an accident but a tragedy that could have been prevented.

On Day 2 of the Ride the Ducks trial, we heard emotional testimony from the driver of the charter bus and a couple who were on the duck boat.

Clouse is talking about the moment a Ride the Ducks vehicle careened across the center line on the Aurora Bridge smashing into the bus that was carrying North Seattle College students.

“I started to move over but it was quick,” Clouse said.

At that same time, for passengers on the duck boat, everything went flying forward.

Susan Gesner said she put her hands on the seat in front of her and ducked back.

“I prayed. I asked God to help us. We were losing control,” Gesner said.

After the impact, both Gesner and Clouse describe an eery silence.

“Why didn’t I see anybody I got up and turned around I didn’t see people,” Clouse said.

“No people I didn’t know where everyone went,” Gesner said.

Gesner says she frantically started looking for her husband Tim.

She spotted him amid the mangled mess.

“I was just grateful he was alive and I was alive,” Gesner said.

Susan’s husband Tim also took the stand describing how he had never seen death before until the incident. The couple and Clouse talked about how the tragedy has changed everything in their lives.

Clouse says he suffers from PTSD and needs therapy to deal with what happened. His wife Nadine Clouse also testified to describe how the accident changed her husband.

In all, five people were killed and more than 60 people injured.

“I cannot tell you how many we had to physically extricate using equipment,” firefighter Erik Hotchkiss said.

Hotchkiss said it took about 25 minutes to help everyone in need which he considers a successful response to the mass casualty. 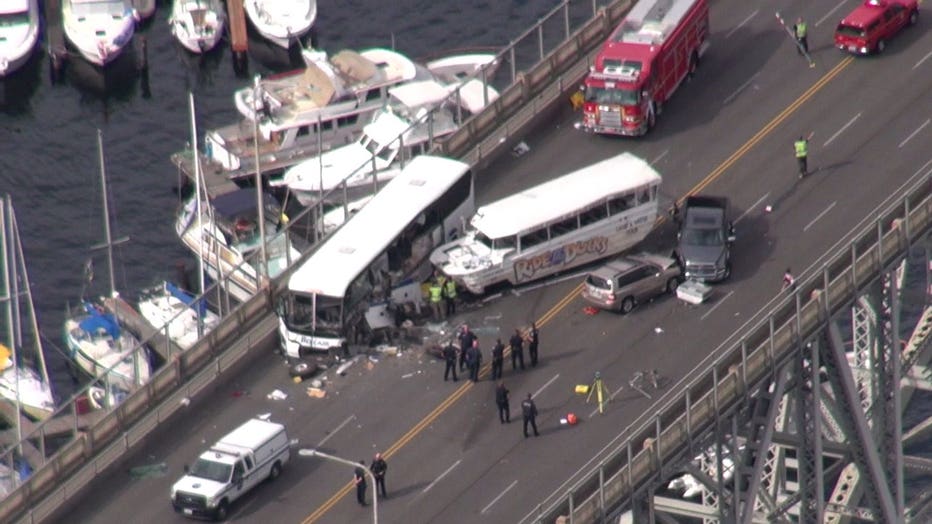 The lead attorney Karen Koehler representing the 42 plaintiffs spent the day painstakingly painting the gruesome scene to jurors who will have to decide whether the accident could have been prevented. An NTSB investigation found that the accident happened after one of the front axles of the duck boat broke off.

Both parties are blaming one another.

The Seattle company says the maintenance of the wheel axles were not explicitly told to them while the vehicle manufacturer says Ride the Ducks Seattle neglected to do the work to improve and maintain the wheel axles.

The plaintiffs are also going after the city and the state saying the Aurora Bridge was not safe and that a median on the bridge could have prevented the duck boat from crossing into oncoming traffic.

“I am still in shock, hard to believe what happened,” Clouse said.

With multiple parties accused the trial could last up to 5 months.