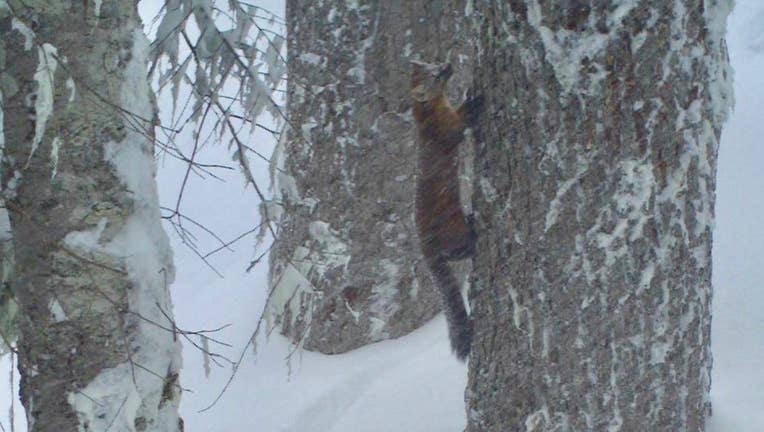 THURSTON COUNTY, Wash. - The elusive Pacific marten was spotted using a motion-triggered wildlife camera last January, marking the first time the species has been recorded by a camera survey in the Olympic National Forest.

According to the Woodland Park Zoo (WPZ), Pacific martens are native to our region, but there have only been 24 sightings in the last 50 years. In summer 2021, the WPZ partnered with Olympic National Forest to install six motion-sensor cameras in hopes of catching a glimpse of the rare carnivore. In July 2022, a survey team sifted through months of footage and discovered their cameras had captured a Pacific marten climbing a tree.

Officials say Pacific martens live in two areas in Washington state; the Cascade Mountain Range and the Olympic Mountains. Marten populations in the Cascades are stable, though over-trapping and habitat loss in the 1900s have caused the marten population to decrease in the Olympic Peninsula.

"Martens and other carnivores are important to the community ecology of Northwest ecosystems," said Robert Long, PhD, Senior Conservation Scientist and Director, Living Northwest Program at Woodland Park Zoo. "The zoo is thrilled to be able to bring our innovative survey methods to this collaborative project, and eager to help secure a future for martens on the Olympic Peninsula."

Since 2008, Olympic National Forest officials have been collaborating with many partners, including the WPZ, to survey for Pacific martens in order to make informed decisions about marten conservation.

Officials say the main factors that might be causing the marten population to decrease are inbreeding depression, habitat-related concerns and a loss of deep snowpack in higher elevations caused by climate change.

The elusive "Pacific Marten" was caught on camera in Thurston County.