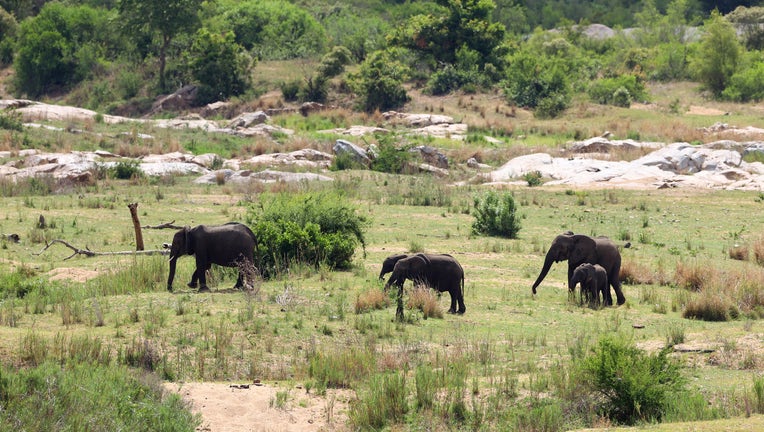 Elephants are pictured in the nearby Kruger National Park during Day One of the Alfred Dunhill Championship at Leopard Creek Country Golf Club on November 26, 2020 in Malelane, South Africa. (Photo by Richard Heathcote/Getty Images)

KRUGER NATIONAL PARK, South Africa - A suspected poacher was killed by a herd of elephants in South Africa on Saturday, according to national park officials.

The incident happened at the Kruger National Park. Authorities said field rangers were out on patrol in the Phabeni area when they spotted three people believed to be poachers. Rangers called for backup when the trio ran away.

Authorities said the suspects dropped an axe and a bag in their escape attempt.

According to a news release, one suspect was arrested and told authorities that the other two accomplices ran into a herd of elephants.

Rangers searched the area and found one man "badly trampled," who he later died from his injuries. The third suspect suffered an eye injury but got away.

"We are proud of the teamwork and dedication of our Rangers Corp, our aviators and the K9 unit," Managing Executive of the KNP Gareth Coleman said. "It is unfortunate that a life was unnecessarily lost. Only through discipline, teamwork and tenacity will we be able to help stem the tide of rhino poaching in KNP."

Investigators said they’re looking for the third poacher and are asking the local community for help.

"The campaign against poaching is the responsibility of all us; it threatens many livelihoods, destroys families and takes much-needed resources to fight crime which could be used for creating jobs and development, "Coleman continued.