Counting of ballots to continue Thursday morning in Philadelphia

FOX 29's Shawnette Wilson has the latest from Philadelphia.

PHILADELPHIA - Pennsylvania election officials urged voters to remain patient as workers continue to sift through an avalanche of mail-in ballots that appear destined to play a large role in determining the outcome of the 2020 presidential election.

“If you’re going to get it right and prevent problems which jeopardize voters votes, it’s more important that we do it right than meet artificial deadlines,” City Commissioner Al Schmidt said.

As of Thursday morning, the city said over 600,000 ballots have been processed, 250,000 of which have come via mail-in ballot. The city expects to process several more mail-in ballots with the valid Nov. 3 postmark in the coming days.

Philadelphia City Commissioner Lisa Deeley described the tedious process that it takes to count the mail-in ballots. She said all returned ballots are sorted before both envelopes are carefully torn open and the ballot is fed through a scanner. 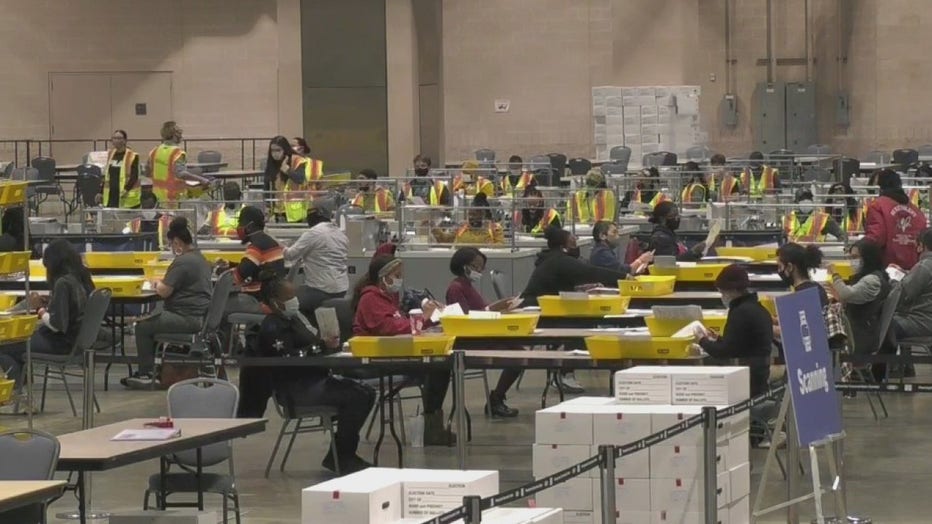 Schmidt said in a vacuum the machine can handle 10,000 ballots an hour going “full tilt.” But shift changes, cleaning procedures and other measures stymie the 24-hour max capacity effort.

Election officials pulled back on their promise of providing scheduled updates at 9 a.m. and 3 p.m. which they proposed on Tuesday night. Schmidt said the department would rather provide updates when possible than stick to an arbitrary timeframe.

On the heels of a lawsuit from the Trump administration that claims a lack of transparency in Pennsylvania's ballot-counting process, city officials have doubled down on their commitment to a safe and thorough election.

During a Wednesday afternoon press conference, Commissioner Lisa Deeley said the city has been "completely transparent" in their count. She pointed to the live stream of election workers counting ballots as evidence of the city's commitment to honesty.

Each party has also been allowed to have certified canvas observers inside the Pennsylvania Convention Center to witness the ballot count, according to Deeley.

"Our number one priority is and has always been to conduct a safe, open and fair election for our residents," Deeley said. "We remain committed to ensuring the integrity of the election process in Philadelphia."

“The delay that we’re seeing is a sign that the system is working,” said Wolf, pledging that all of the votes were “going to be counted accurately and they’re going to be counted fully.” He said that “every Pennsylvanian can have confidence in the outcome of this election.”

City Commissioner Al Schmidt offers insight into how the city is handle the tedious process of counting ballots.

Wolf accused Republicans of seeking to undermine confidence in the election results, and his elections chief said the state acted legally and properly to ensure a complete and accurate count. More than 2.6 million mail-in ballots were cast, and there has been no report of fraud or any other problem with the accuracy of the count.

Condemning the Trump campaign, Wolf said: “Our election officials at the state and local level should be free to do their jobs without intimidation or attacks. These attempts to subvert the democratic process are disgraceful.”

Some of Pennsylvania’s most heavily populated locales, including Philadelphia and suburban counties like Montgomery, Chester, Bucks and Delaware — all seen as fertile territory for Biden — were tabulating mailed votes around the clock. Several GOP-run counties where Trump dominated in 2016, including York, Cumberland, Butler and Westmoreland, also had tens of thousands of votes left to count.