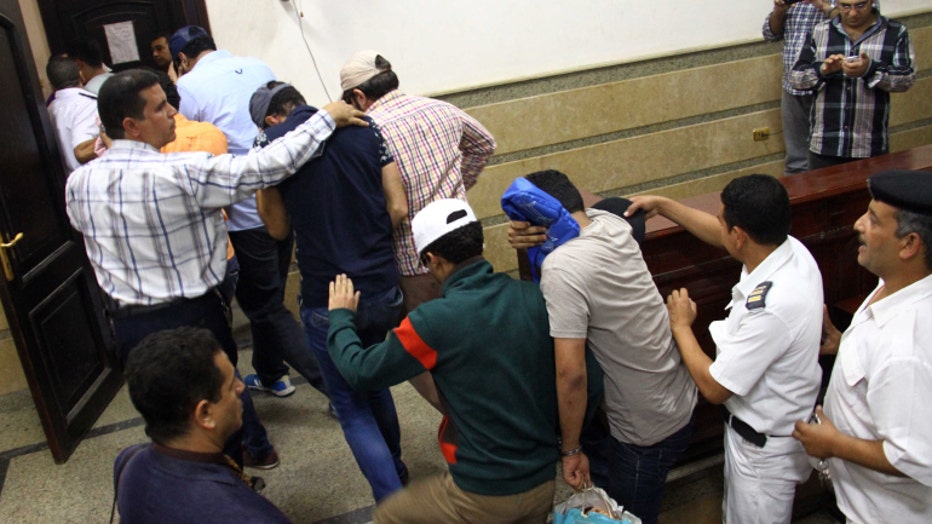 Egyptian men on trial for doing a video prosecutors claimed was of a gay wedding enter the courtroom in Cairo on November 1, 2014. The video, filmed aboard a Nile riverboat, shows what prosecutors said was a gay wedding ceremony, with two men in the

(CNN) -- By the big smiles, warm hugs and loud cries of ululation, the video seems to show a joyous celebration.

An Egyptian prosecutor looked at the same footage and saw something very different: a "satanic ceremony" with images that are "shameful, regrettable and anger God."

However it is characterized, the event has landed eight men in jail for three years, an Egyptian court ruled Saturday. The men will face three years of probation upon their release, according to Egypt's state-run Ahram Online.

It's all because of a roughly 1-minute video set upon a Nile riverboat. It shows several well-dressed men, one of which pulls out a ring and slips it on another man's finger. The two had a brief kiss, then hug -- all as others on the boat cry out happily around them. There's a cake with two men's picture on it.

"May your night be filled with pomp and ceremony," one man says.

In early September, the suspects were detained as part of an investigation ordered by Prosecutor-General Hisham Barakat for allegedly broadcasting footage that "violates public decency." The prosecutor's office accused the men of "debauchery" and "undermining public morals" for their part in what it described as a same-sex wedding.

The prosecutor's statement claims the event took place in April, but was only recently posted as an act of revenge against one of the men filmed in the video.

Very soon after, on September 8, Egypt's forensic authority announced that seven of the arrested men had been physically inspected and were determined to be "not gay," according to another Ahram Online story. The authority's spokesman, Hisham Abdel-Hamid, said the inspection found that they "have never had sex with other men."

The eighth suspect -- who was an alleged groom in the video -- didn't show up for a physical inspection, according to the report.

A man in the video has denied, in an interview with privately owned Rotana Masriya TV, that it depicted a marriage between the two men. Rather, he claimed that he was holding a birthday party for a friend and gave him a silver ring as a gift.

There are no laws explicitly against same-sex relations in Egypt. Still, other laws -- such as those against "shameless public acts" -- have been used in recent years to arrest and prosecute gay men in recent years, Ahram Online notes.

The eight men in this case, for instance, were convicted on charges of "debauchery."

In September, a judicial source told Ahram that six men were arrested and soon thereafter sentenced to two years in jail with labor for "committing debauchery" after an apartment raid.

Four men were sentenced to prison in April for similar morality charges. And in 2001, Egypt arrested more than 50 men in a raid on a gay nightclub on the Queen riverboat.