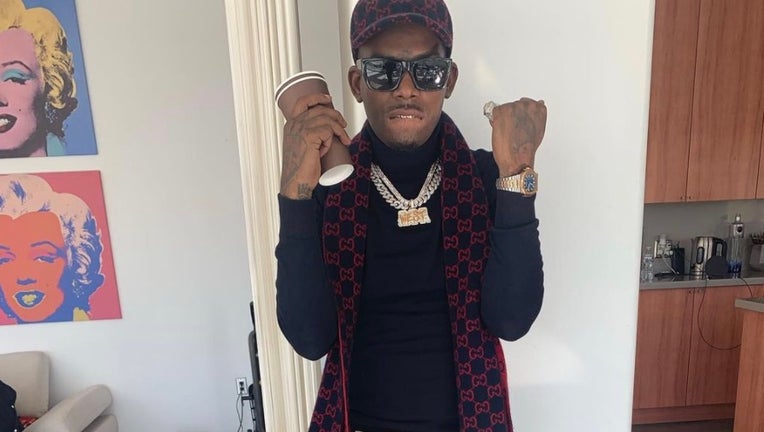 LOS ANGELES - An up and coming rapper who boasted in a YouTube music video for his song "EDD," which is about getting rich from committing unemployment benefits fraud was arrested Friday in Los Angeles on federal charges of carrying out that very scheme by fraudulently applying for more than $1.2 million in jobless benefits, including by using stolen identities, federal prosecutors announced.

Baines who's from of Memphis, Tennessee, and currently resides in the Hollywood Hills, is expected to make his initial appearance Friday afternoon in Los Angeles federal court.

The criminal complaint alleges three felony offenses -- access device fraud, aggravated identity theft, and interstate transportation of stolen property. If convicted of all of charges, Baines would face up to 22 years in federal prison, according to the U.S. Attorney's Office.

Prosecutors allege Baines exploited the Pandemic Unemployment Assistance provision of the CARES Act, which is designed to expand access to unemployment benefits to self-employed workers, independent contractors and others who would not otherwise be eligible.

RELATED: California EDD says it'll be months before all backlog of claims are fulfilled

According to an affidavit filed with the criminal complaint, Baines possessed and used debit cards pre-loaded with unemployment benefits administered by the California Employment Development Department. The debit cards were issued in the names of third-parties, including identity theft victims, according to prosecutors, who allege the applications for the cards. listed addresses to which Baines had access in Beverly Hills and Koreatown.

Evidence gathered during the investigation established that at least 92 debit cards that had been pre-loaded with more than $1.2 million in fraudulently obtained benefits were mailed to those addresses, according to the affidavit. Baines and his co-schemers allegedly accessed more than $704,000 of those benefits through cash withdrawals, including in Las Vegas, as well as purchases of merchandise and services.

The affidavit further alleges that Baines bragged about his ability to defraud the EDD in a music video posted on YouTube and in postings to his Instagram account, under the handles "nukebizzle1" and "nukebizzle23."

On Sept. 23, Las Vegas police arrested Baines, who had in his possession eight debit cards, seven of which were in the names of other people, the affidavit states.