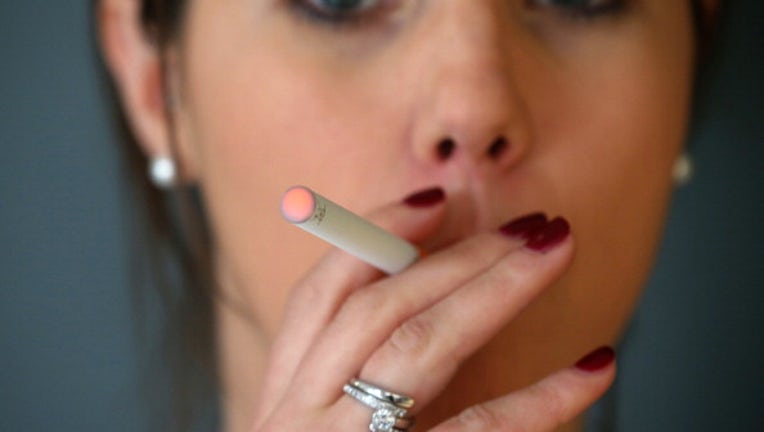 In this photo illustration a woman smokes an e-cigarette on April 2, 2014 in London, England.

WASHINGTON -- As electronic cigarettes increase in popularity, calls to the nation's poison control centers about exposure to the liquid nicotine used in many of the devices have surged, the Centers for Disease Control and Prevention said Thursday.

In February, there were 215 poison center calls involving e-cigarettes, the CDC said in its Morbidity and Mortality Weekly Report. That's compared to one per month in September 2010.

And 51% of those calls involved children 5 and under, officials said.

Since not all poisonings get reported, the CDC said the total number of cases is likely even higher.

Nicotine is a drug, and in its concentrated liquid form, poison experts warn it is also significantly toxic, even in small doses. E-cigarettes, which are not required to be childproof, feature flavors like spearmint, banana and bubble gum, making them appealing to kids.

"What's attractive to kids: It's the smell. It's the scent. It's the color," said Gaylord Lopez, director of the Georgia Poison Center. "A kid's not going to know the difference between a poison and something they can drink."

An Oklahoma mother found that out the hard way when her 4-year-old son got his hands on the liquid nicotine used to refill her e-cigarettes.

"We hear a little noise, come in and he has taken the lid off of all of them and has this liquid everywhere. He's got it all over him. He's been eating it," Ren Gaulrapp told CNN affiliate KFOR.

Her son was rushed to the emergency room and vomited all day long.

Poisonings can also occur when liquid nicotine is inhaled or absorbed through the skin or eyes, and other side effects can include nausea and eye irritation. It can even be deadly. One person used the liquid to commit suicide by injecting it, according to the CDC.

Lopez said his poison center has also taken calls from adults who've spilled e-cigarette nicotine on themselves while filling up the devices.

"You can start to feel sick in as little as four to five minutes," he said. "The fumes themselves can be poisonous, and if we inhale them for long enough we're going to get a little sick to our stomach."

About 42% of the poison calls in February involved people age 20 and older, the CDC said.

E-cigarette products are currently not regulated by the Food and Drug Administration. Poison control experts say the liquids, found in bottles or cartridges that have been known to break, need to be better controlled.

"There's no legislation on the books right now," Lopez said. "A product as dangerous as this, as lethal as this, child-resistant caps would be a great help."

"We have expressed our concerns about unregulated liquids on many occasions, but we do not want to demonize them as the culprit for this problem," Story said in a statement. "The toxicity for all products is in the dosage."

"We have provided the regulatory bodies information and guidelines on this that can easily be implemented and then could eliminate these cases entirely."

Educating e-cigarette users is also a crucial step in eliminating the incidents, he said.

"Responsibly marketed and properly regulated, it is possible that e-cigarettes could benefit public health if they help significantly reduce the number of people who use conventional cigarettes and die of tobacco-related disease," said Matthew Myers, president of Campaign for Tobacco-Free Kids, in a statement.

"But in the absence of FDA oversight, the easy availability of nicotine in uncontrolled quantities, packaging and flavors and marketing that appeals to youth raises serious concerns."

Gaulrapp, the mother in Oklahoma, said she has since moved her liquid nicotine up and out of her son's reach.

"It smells like candy. It really isn't," she told KFOR. "This really can hurt you."