SEATTLE -- Free college could soon become a reality for all high school students in Seattle.

"How many people think Seattle jobs should go to Seattle kids?" Durkan yelled at a crowd of students at Ingraham High School before signing.

Durkan said the affordability crisis is the central problem in Seattle and obtaining a post-secondary degree, credential or certificate is necessary to obtain a living wage job. She pointed to a statistic that said by 2020, 70% of all jobs in Washington state will require some post-secondary education, but only about 31% of Washington's high school students get that by the age of 26.

The 2018-19 school year will serve as a transition year, according to the timeline released by the mayor's office.

During this transition year, a total of six Seattle area high schools will be served through the Seattle Promise College Tuition Program in partnership with all three Seattle colleges.

The program is expected to serve about 1,000 high school and college students, including approximately 500 students in six high schools who will have access to support and outreach staff for college readiness and wrap around college preparation services. 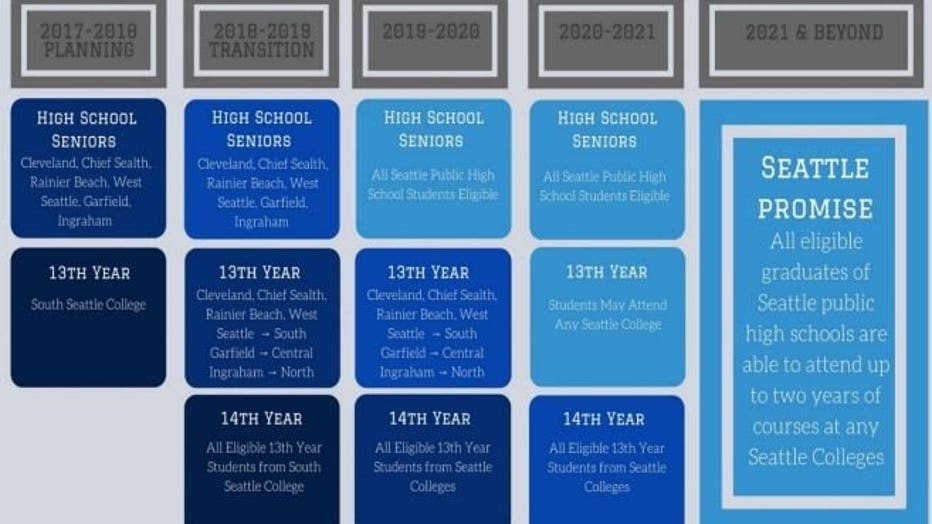 Cost of the program

Durkan's office estimates the program will cost $6.3 million annually, once the program is fully implemented.

That cost is based on enrollment projections from South Seattle College and includes staff for college preparation and wrap around support at both the high school and college level, “last dollar” scholarships, and additional budget for equity funds for students who require additional assistance.

Durkan's office didn't specifically say how the program will be funded but said the program will likely include a combination of city investment, private partnerships, and Seattle Colleges.

“Barriers to college often span generations, and for too long have held back communities of color, immigrants, and refugees. Seattle Promise will open doors and change the lives of our young people by creating true economic opportunity for Seattle students," Durkan said.

In November 2017, Durkan signed an executive order directing the City of Seattle to create the Seattle Promise College Tuition Program.