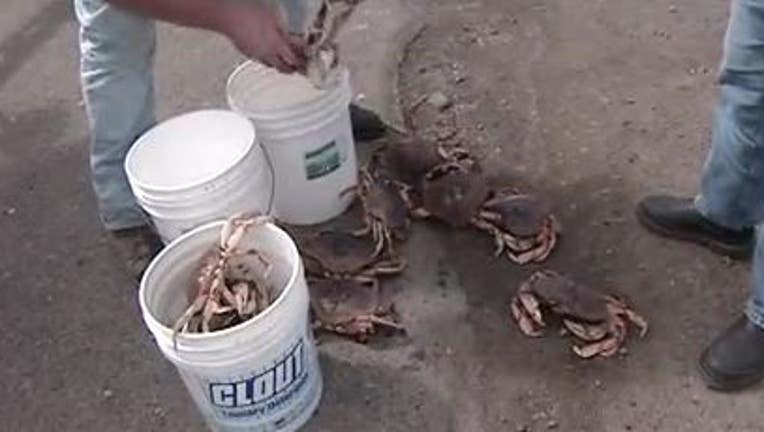 WASHINGTON - Marine toxins, skinny crabs and contentious price negotiations have all had a hand in delaying the start of Oregon’s lucrative commercial Dungeness crab season in recent years.

Not this season — at least not yet.

For the first time in years, commercial Dungeness crab fisheries in Oregon, Washington state and Northern California will begin on the traditional Dec. 1 opener after recent preseason testing showed high meat yield in crabs across the region.

At the same time, domoic acid — and the diatom that produces the naturally-occurring marine toxin — seems to have almost disappeared from ocean waters off Oregon and Washington.

Crabbing vessels can begin to set gear on Nov. 28 and could begin pulling ocean crab pots on Dec. 1.

It is the first time in years that Oregon has cleared meat fill hurdles in the first round of tests, Tim Novotny, spokesman for the Oregon Dungeness Crab Commission, told The Astorian.

A starting price per pound still needs to be set, but, Novotny said, "we are over one big hurdle to a potential Dec. 1 opener for the first time since 2014."

Last season, the state gave commercial crabbers the green light in mid-December but regional price talks and elevated levels of domoic acid in Washington delayed the start of season.

Still, with the all-clear from the state this season, fishermen and buyers can begin to prepare in earnest earlier than has been normal for a while.

Crab could be at markets in time for Christmas this year, another first in a long time, said Dan Ayres, coastal shellfish manager with the Washington Department of Fish and Wildlife.

Commercial Dungeness crab is one of Oregon’s most valuable fisheries. Despite a delay last year, fishermen still landed 12.2 million pounds coastwide in Oregon for an ex-vessel value of $60.6 million. The West Coast fishery is managed under a tri-state agreement between Oregon, Washington and California.

Cold water off the coast now could also mean domoic acid is unlikely to be an issue this winter. The toxin load in razor clams — an important indicator species when it comes to tracking the presence of domoic acid — is in the single digits and dropping in Washington state, Ayres said.

In Oregon, domoic acid and pseudo-nitzschia, the diatom that produces the toxin, is just "background noise at this point," said Matt Hunter, shellfish project manager with the Oregon Department of Fish and Wildlife.

"You never give it 100% confidence, but I think compared to past years it certainly looks better than it was," he said.

The good meat fill results may also be a boon for the fishery beyond allowing for an earlier start. Fishery managers do not use the tests to predict crab abundance, but Ayres said they did see a higher number of crabs in pots they pulled.

It is impossible to predict very far in advance for any fishery, however.

"We’ll see what we see when we get there," Ayres said.

But, he added, "I think we’re headed for some positive stuff ahead."