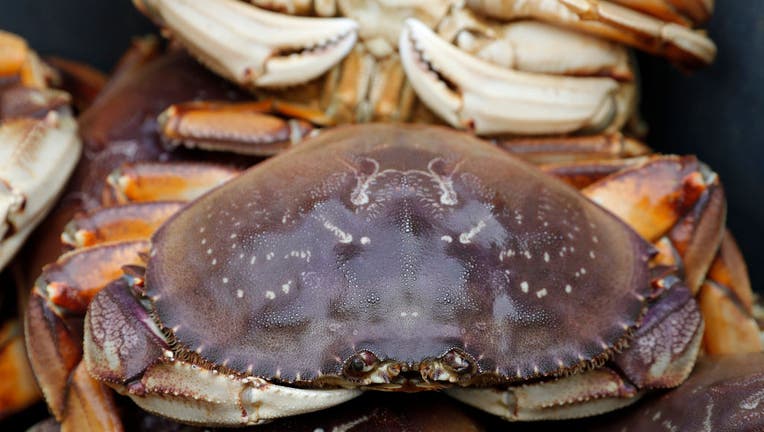 An important species of crab found primarily along the West Coast is fighting off a combination of stressors that experts at the North Atlantic and Atmospheric Administration say has fishermen finding piles of dead shellfish, and the impacts are affecting the economy.

Dungeness crabs are typically found along water beds, and their harvest can be worth a quarter-billion dollars annually.

NOAA Fisheries believes the combination of a lack of oxygen, harmful algal blooms, water temperatures and ocean acidification plays a role in the animal’s disappearance.

"Hypoxia, ocean acidification, harmful algal blooms, and marine heatwaves are already present on the Olympic Coast, and we need to understand how future events are likely to interact and affect resources in the sanctuary in the future," Jenny Waddell, research coordinator at Olympic Coast National Marine Sanctuary, said in a statement. "Trends indicate that ocean conditions have worsened in the past two decades, affecting both the living resources and the human communities, including Coastal Treaty Tribes on the Olympic Coast, who depend on them."

The Dungeness crab is one of several species in the Northeast Pacific that has experienced a dramatic population decrease during recent seasons.

In October, the State of Alaska took the unprecedented measure of canceling its snow crab season due to what biologists said was a concerning drop in population.

While the official cause of both significant die-offs is unknown, NOAA said that a four-year project is underway to determine the impacts on marine ecosystems from climate change.

Scientists and research institutions are focusing efforts on Dungeness crab and krill to ultimately improve the management of fisheries.

WATCH: NEW JERSEY FISHERMEN HAVE WHALE OF A TALE TO TELL AFTER NEARLY STRUCK BY MASSIVE HUMPBACK

Regulations on the harvesting of crabs vary by state, but fishermen in California will likely experience a double whammy, with state officials postponing the start of the season.

Recent sightings of humpback whales along the coast have forced the closure of the harvesting season until at least December 1.

"Based on recent surveys, large aggregations of humpback whales continue to forage in California coastal waters and allowing the use of crab traps would increase the risk of an entanglement," said Charlton Bonham, director of the California Department of Fish and Wildlife.

A reassessment of the whales' status is expected to occur later in November, with the hope that fisheries will open through spring 2023.