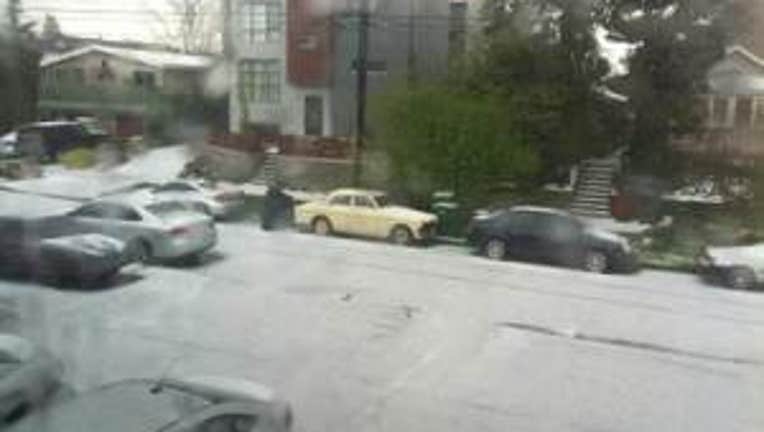 After a bit of wild weekend of weather this weekend-- we're going to be warming up and drying out not only today, but for at least two or two and half days.

Cold unstable air mass combined with a strong jet stream overhead fueled some heavy rain showers and some accumulating hail on Saturday. The tiny pea sized hail wasn't big enough to damage cars-- but there was enough to make for some slick driving around the Sound. The cold push of air also dropped our temperatures to the low 50s for afternoon highs. Our official high temp of 51 at SeaTac Int'l would be normal if it were near Valentine's Day-- but certainly chilly for mid-April.I think we'll see some nice clearing this Monday afternoon as a dry northerly flow develops for Western Washington. High temps mid 50s-- which is cooler than normal but warmer than this COLD past weekend. Snow levels still low: between 2-3 thousand feet. A few mountain showers this afternoon-- and mostly only for the eastern slopes of the Cascades.

Tuesday and Wednesday look dry with some nice afternoon clearing after morning fog. Wednesday night we'll see high clouds creep back into the forecast. Thursday looks to be dry but cloudy. Rain could arrive in Seattle by Thursday evening. Showers and sunbreaks for Friday and likely the first part of Saturday for Earth Day. Sunday highs could finally get back into the 60s. Enjoy! -Meteorologist Tim Joyce