On Monday West Pierce Fire & Rescue responded to five brush fires in a single day. The night before they were called out to several others – including one that threatened a number of homes.

On Monday, West Pierce Fire & Rescue responded to five brush fires in a single day. The night before, they were called out to several others – including one that threatened a number of homes.

According to Battalion Chief Nic Britton, one person was rescued as the fire reached a large tree and started to burn the home's exterior.

"The game has completely changed when it comes to brush fires," he said. "Especially in an urban area like this."

Britton said brush fires were rare in his early years with the fire department. In recent years, the calls for brush fires have spiked, and all it takes is a slight breeze to change the response from a single truck, to multiple departments. 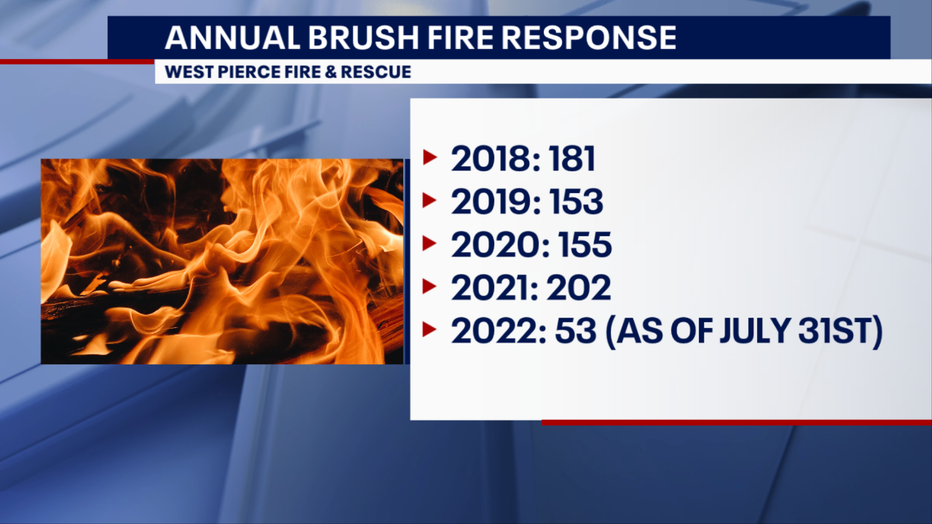 The big wakeup call was 2020. Britton, and his fellow firefighters, were prepared for a difficult day – but what unfolded surprised even him.

"We had a really large fire on I-5 at the same time East Pierce was fighting the Sumner-Grade complex fire, and Graham was battling a large fire," explained Britton. "At one point, we were told there were no fire resources in all of Pierce County. That was a big ‘a-ha’ moment for me."

It’s changed how fire crews battle brush fires. Britton said firefighters themselves are a finite resource. They’ve always had a mutual aide agreement with other departments. These days they’re working together more than ever, that includes across county borders.

The western U.S. has warmed by nearly two degrees on average since the 1980s – those numbers get attention when battling wildfires, but it’s also a concern for homeowners too as dry vegetation can quickly catch fire.

A slight wind can make all the difference, and turn a small brush fire into a larger problem.

That was the case on Sunday when a fire in Lakewood ignited behind the Clover Park Early Learning Center. It was only 5-foot by 5-foot when the call came in, but by the time the fire was out half a dozen fire trucks had been called after flames had spread behind a number of homes.

Ryan Nelson, who lives in one of the homes, told FOX 13 that everyone in the neighborhood rushed in as fire crews tried to cut-off the fire. Homeowners rotated on garden hoses soaking fences, in a last-minute effort to prepare the property.

"When you’re doing it, it feels like it’s going on forever," said Nelson. "Some people are helping to pull the hose, some are on the hose. If someone was spraying for a long time you’d get smoke in your face, and you’d switch out."

For the firefighters themselves, the conversation about shifting needs isn’t to scare anyone. Britton simply hopes that people are cognizant of the conditions they face on hot, dry days. Simple steps like being mindful of where you put out a cigarette, whether you burn a tiki torch, or park on dry grass can all make a difference.

"When we have a drier and hotter climate that contributes," he said. "Especially when you have a lack of moisture – it creates that perfect environment to have a fire that spreads out of control quickly."