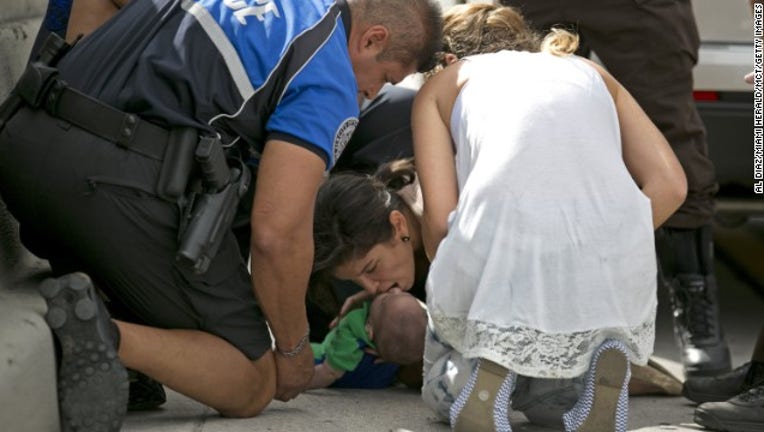 Pamela Rauseo performs CPR on her nephew, 5-month-old Sebastian de la Cruz, after pulling over her SUV on the side of the westbound lane on Florida state road 836, just east of 57th Avenue, on Thursday, Feb. 20, 2014. At right is Lucila Godoy, who st

MIAMI (CNN) -- Pamela Rauseo was stuck in traffic on a Miami highway Thursday when her 5-month-old nephew, strapped into his car seat behind her, stopped screaming -- and she knew something was very wrong.

"That was a red flag for me, because the car was at a standstill, and he'd had a little bit of a cold, and I knew that he was congested, so I got really worried," Rauseo said Friday of her nephew, Sebastian de la Cruz.

She had good reason to worry as she stopped along State Road 836, a six-lane stretch of concrete known locally as the Dolphin Expressway.

"I pulled over on the left, and I jumped to the back to check up on him, and he was out. He was sleeping, and I touched him to stimulate him. I got no response, so I took him out of his car seat, and he was completely limp and turning purple. I tried to call 911, but I was just so nervous, my hands wouldn't function."

Lucila Godoy was among the first.

"I was driving in the middle lane; she was in the fast lane, and all of a sudden I see her, and she's screaming and she's holding the baby and she's putting it up and down," Godoy said. "I just stopped the car and jumped out of the car, and I asked her what was going on, and we started working as a team."

Godoy had taken a CPR course when she was pregnant in Venezuela with her own son, also named Sebastian. "I didn't even think about it," she said. "I just hold the baby like my baby. ... When I heard her screaming 'Sebastian,' that was hard."

Soon, Sweetwater Police officer Amauris Bastidas stopped and helped the women perform chest compressions on the struggling infant, who resumed breathing on his own.

Miami Herald photographer Al Diaz was among those stuck in traffic.

"An SUV stops in front of me, and I didn't think anything of it," he told CNN affiliate WSVN. "But I started hearing screaming, and I couldn't tell where the screams come from, and I looked at my phone, and I looked at my radio and I look up again, and a woman pops out of a car holding a baby, screaming, 'Help me! Help me! My baby's not breathing.' "

He went looking for help and found it coming from all sides, then snapped into his mode as a photographer and began documenting what he saw. "That moment now is frozen in my mind," he said. "That's just the way I see."

But the ordeal was not over. Sebastian stopped breathing again.

"It was like the nightmare started all over again," Rauseo said. Bastidas resumed performing chest compressions, "and the baby finally reacted, and this time it was for much longer -- until the fire/rescue came."

Sebastian was taken to Jackson Memorial Hospital, where he was in critical condition Friday, his aunt said.

"We're confident he'll be fine," Rauseo said. "We just need to get to the root of what's causing these issues for him."