First Lady Jill Biden and Duchess of Cambridge Kate Middleton are all smiles as they visit per-preschoolers in Cornwall. United Kingdom.

WASHINGTON - First Lady of the United States Dr. Jill Biden graced the cover on Vogue Magazine’s August issue which was released on Tuesday.

The magazine declared Dr. Biden was the "First Lady for all of us" and a "joy multiplier" in its cover story.

Wearing a navy blue dress with floral designs, the first lady stood on the balcony of the White House in her cover photo with the Washington Monument in the background.

Author Jonathan Van Meter followed Biden, a community college professor, on the road as she met with students across the country, observing that, "in all the places she goes lately she is honored as a woman with several degrees who has worked really hard her whole life at the most relatable job there is."

"Which is not to say that Dr. Biden, who is constitutionally shy, doesn’t take special delight in these visits. She becomes looser, goofier, and more expansive," Van Meter wrote. "You generally hear her before you see her because she is often laughing. She is, quite simply, a joy multiplier." 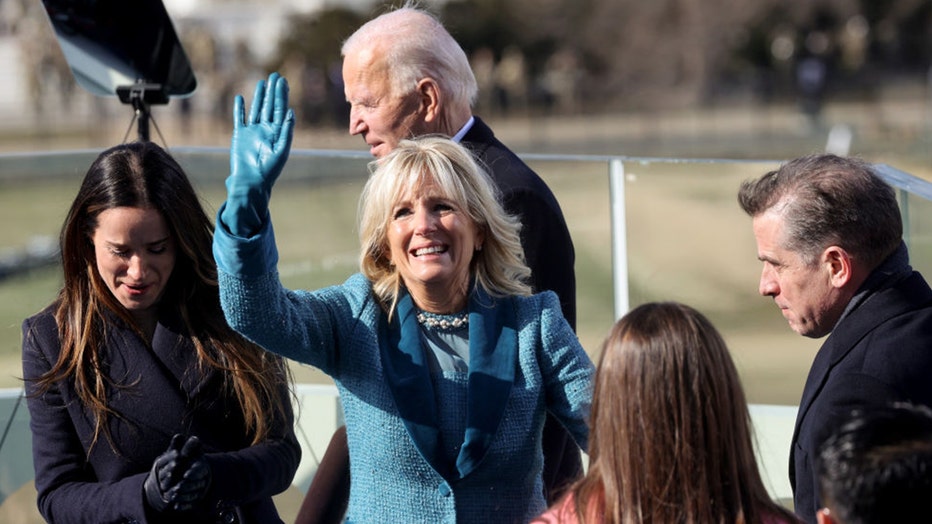 FILE - Dr. Jill Biden waves next to Ashley and Hunter Biden after her husband Joe Biden was sworn-in as the 46th President of the United States on the West Front of the U.S. Capitol on Jan. 20, 2021 in Washington, DC.

The cover story detailed her familiarity with life at the White House and her readiness to hit the ground running as the first lady.

Dr. Biden also noted that she used her previous knowledge as the second lady to basically pick up where she left off during the Obama administration, even reviving Joining Forces, "the military family–support initiative she launched with Michelle Obama 10 years ago," according to Vogue. She spoke about the importance of using her platform to not only conduct public duties but also taking charge of staffing, cultural events and state dinners, all while juggling being a professor of writing at Northern Virginia Community College.

"Well, don’t you think that I always had a lot going on? I like that kind of energy," she told Vogue. "When I became second lady—and there was so much I wanted to do—I always said, ‘I will never waste this platform.’"

"And now I have a bigger platform," Dr. Biden told Vogue, "and I feel every day, like....What could I give up? That I would want to give up? Nothing. If anything, I feel like adding more things, but I know it’s not possible, because you want to stay centered, because you want to do things well. And there’s so much to do. There is...so. Much. To. Do."

Vogue has had several first ladies on the cover of issues in the past, starting with Lou Henry Hoover, the wife of President Herbert Hoover, in the late 1920s, according to the magazine’s archives.

Former first lady Michelle Obama made the cover of Vogue three times in seven years, according to the magazine.

While many celebrated Dr. Biden’s first cover appearance on Vogue as the first lady, many also pointed out on social media how the fashion magazine snubbed former first lady Melania Trump.

However, Trump is not the first wife of a former president to not be on the cover of Vogue. Bess Truman, wife of President Harry S. Truman, was not featured while serving as first lady in the 1940s and 1950s.