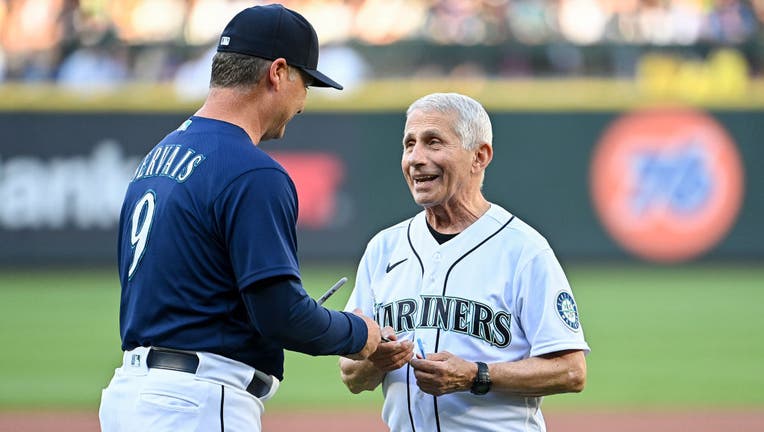 SEATTLE, WASHINGTON - AUGUST 09: Manager Scott Servais #9 (L) of the Seattle Mariners and Dr. Anthony Fauci, director of the National Institute of Allergy and Infectious Diseases and chief medical advisor to the U.S. president, meet before the game b

SEATTLE - Dr. Anthony Fauci was awarded the 2022 honorary Hutch Award on Tuesday night prior to the Seattle Mariners’ game against the New York Yankees.

Fred Hutchinson Cancer Research Center awarded Fauci for his lifetime of service toward a healthier world.

The award is typically given to a Major League Baseball player who exemplifies the determined spirit of the late Fred Hutchinson, a legendary pitcher and manager who died of cancer in 1964 at age 45.

The Hutch Award was created in 1965 to honor Hutchinson, whose death inspired his brother Dr. Bill Hutchinson, a surgeon in Seattle, to create the Seattle-based cancer center.

Past honorees include 14 Hall of Fame players, and this is the second time an honorary Hutch Award has been given. The first honorary award went to former President Jimmy Carter in 2016, in recognition of a lifetime of service.

Fauci also threw out the ceremonial first pitch to Seattle's manager Scott Servais before Tuesday's game. He was greeted by mostly cheers from the Seattle crowd with some boos mixed in. It was far better pitch than when he threw out the first pitch in Washington in July 2020.

After the pitch, Servais had Fauci autograph a facemask after catching the first pitch.