SPOKANE, Wash. (FOX28)  – Dozens protested the opening of a new bar in downtown Spokane called the Daiquiri Factory after the bar named one of the drinks on the menu “Date Grape Koolaid.” 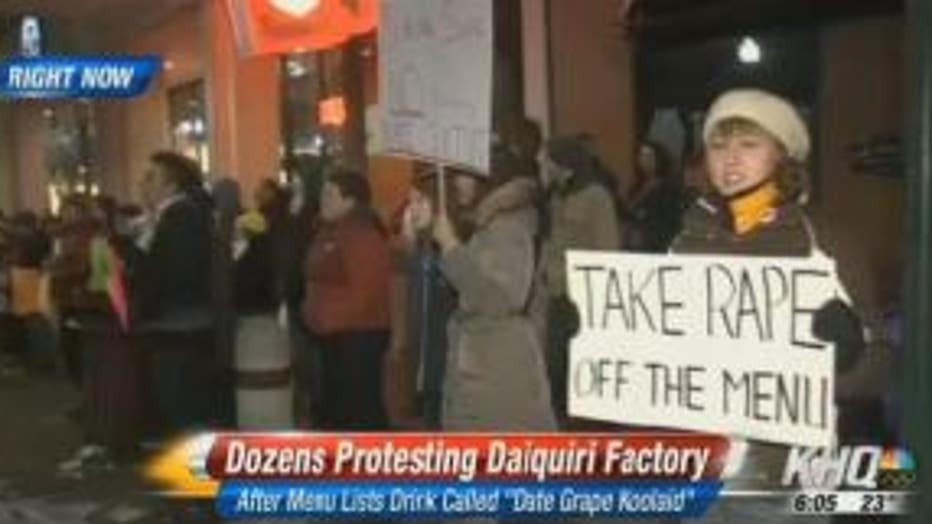 The name immediately started an uproar in the community, with people posting on the businesses website and Facebook page saying the name is offensive and pokes fun at a very serious topic, date rape. Even after the negative response, the Daiquiri Factory has not changed the name of the drink, so on opening night Saturday, dozens protested outside.

Taylor Malone, the organizer of the protest, says the name of the drink is offensive for several reasons.

“As someone who has survived rape twice, the most recent one being three months ago, it tells me and other survivors that our experiences don't matter and that people either don't believe us or don't care about us and that all we are is a punch line,” Taylor Malone said.

Taylor told us she thinks the name of the drink did start as a joke, but it is not one she finds funny.

On the Daiquiri Factory’s Facebook page, many people have commented asking for the name to be changed. On the page Kara Kingen wrote, “I can't believe more people haven't picked up on this. Date Grape Koolaid? With date rape statistics higher than ever and even worse in a college town, this is clearly a dangerous mentality to perpetuate.”

Underneath that post, the Daiquiri Factory commented, “You know why they haven't because they’re smart enough to know that this is not what it is meant.”

The bar also commented later saying, “It's A Daiquiri Bar, not a CANDY STORE! 21 & UP WELCOME!”

We did put in a call to the owner of the bar to find out the meaning behind the name of the drink, however, we have not yet received a response.

“I would hope they would apologize and change the name,” Taylor said. “At this point, with all of the backlash against the name and the response from the owners it doesn't seem like that's likely.”