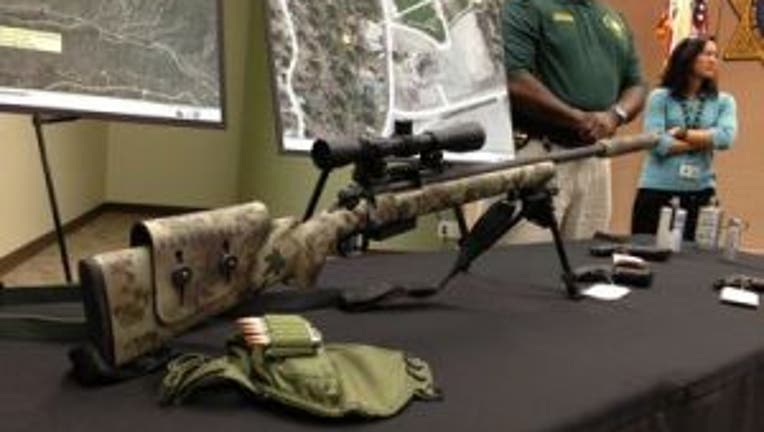 Officials said it appears the wound was self-inflicted but said a final determination has not been made.

At a news conference Friday, officials announced that they had found a cache of weapons as well as a powerful tear gas and high-capacity magazines in the possession of  Dorner or at sites connected with him.

Dorner was killed at the end of a long standoff Tuesday with SWAT deputies in a cabin near Big Bear.

Several experts said they believe that deputies' actions that set off the fire that ended the standoff appear to be justified.

San Bernardino County Sheriff John McMahon at a Wednesday news conference adamantly denied that deputies intended to burn the cabin down . But the department on Thursday declined to answer further questions about the standoff.

Sources, however, have provided details of what happened.

The day's light was fading when the SWAT officers decided they could wait no longer for Dorner to surrender.

Dorner, the fired Los Angeles cop suspected of killing four people in a campaign of revenge, had been holed up in a cabin near Big Bear Lake for hours, trading gunfire with sheriff's deputies. He ignored repeated calls over a loudspeaker to surrender. Attempts to flush him out with tear gas led nowhere.

Wanting to end the standoff before nightfall, members of the sheriff's SWAT unit carried out a plan they had devised for a final assault on the cabin, according to law enforcement sources. An officer drove a demolition vehicle up to the building and methodically tore down most of its walls, the sources said.

With the cabin's interior exposed, the officer got on the radio to others awaiting his order. "We're going to go forward with the plan, with the burner," the unidentified officer said, according to a recording of police radio transmissions reviewed by The Times.

"The burner" was shorthand for a grenade-like canister containing a more powerful type of tear gas than had been used earlier. Police use the nickname because of the intense heat the device gives off, often starting a fire.

"Seven burners deployed," another officer responded several seconds later, according to the transmission which has circulated widely among law enforcement officials. "And we have a fire."

Within minutes the cabin was fully engulfed in flames, ending a dramatic manhunt that captivated the nation.

The SWAT radio transmission, in addition to the comments of at least one officer who earlier in the gun battle could be heard by a TV reporter calling for the cabin to be burned down, have raised questions as to whether authorities intentionally set the structure on fire to end the standoff.

Multiple sources, who were at the scene and asked that their names not be used because they were not authorized to discuss the case, said the decision to use the incendiary gas canisters came amid mounting concern that time and options were running out.