2020 election was ‘most secure in American history,' according to CISA committees

According to the joint statement released Friday by the committees, which are part of the Cybersecurity and Infrastructure Security Agency under DHS, election officials are reviewing and double-checking the entire election process, and have not found evidence of widespread voter fraud or irregularities.

Dominion Voting Systems filed defamation suits on Tuesday against conservative media networks Newsmax Media, Inc. and the parent company of One America News Network, as well as the former CEO of Overstock.com, over false claims that the company rigged the 2020 U.S. presidential election for Joe Biden.

Dominion, one of the largest voting machine companies in the country, said in a statement that the defendants "recklessly disregarded the truth when they spread lies in November and continue to do so today." It alleges that their false claims that the company rigged the election have cost it $1.6 billion in lost profits, company value and reputational damage.

"Over the course of several months, OAN manufactured, endorsed, repeated, and broadcast a series of verifiably false yet devastating lies about Dominion," the complaint states.

The company alleges that the "barrage of lies" has caused severe damage to the company. It accuses OAN of spreading a false narrative by airing and promoting interviews with "discredited figures" such as lawyers who represented former President Donald Trump, Rudy Guiliani and Sidney Powell, as well as MyPillow CEO Mike Lindell, and Patrick Byrne, a Trump ally who founded Overstock.com and later stepped down from his role in 2019.

Biden earned 306 electoral votes to Trump’s 232, the same margin that Trump bragged was a landslide in 2016 when he won the White House against Hillary Clinton.

Government and election officials repeatedly have described the 2020 election as the most secure in U.S. history. Even former U.S. Attorney General Bill Barr, a Trump ally, said before leaving his post that there was no evidence of widespread fraud that would overturn the result.

Nearly all the legal challenges from Trump and his allies have been dismissed by judges, including two tossed by the Supreme Court, which includes three Trump-nominated justices. 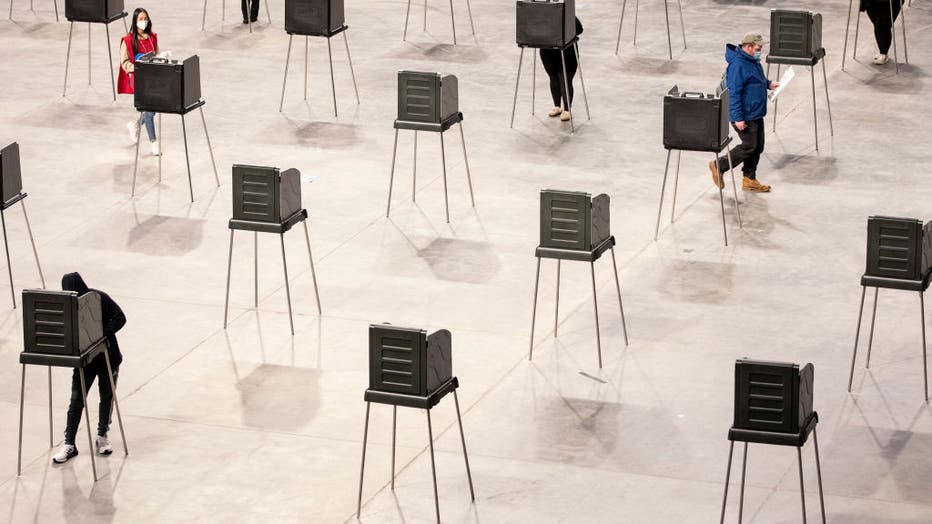 FILE - A poll worker walks over to sanitize a voting booth after a voter leaves to walk their ballot over to the machines at Cross Insurance Center on Nov. 3, 2020, in Bangor, Maine. (Staff photo by Brianna Soukup/Portland Press Herald via Getty Imag

A separate defamation suit filed by Dominion is against Byrne, accused of promoting the false narrative that the 2020 election was rigged.

"Patrick Byrne is responsible for bankrolling and promoting a viral disinformation campaign about Dominion that reached millions of people worldwide. We are suing to set the record straight, to vindicate Dominion's rights, to hold the Defendants accountable, and to recover damages for the devastating economic harm done to Dominion's business," Dominion attorney Stephen Shackelford said in the statement.

In the defamation suit against Newsmax, Dominion says the company emerged from the 2020 election "with arguably the most-tested, most-scrutinized, and most-proven voting technology in recent history." But it accuses influential media companies like Newsmax of promoting lies.

"Newsmax helped create and cultivate an alternate reality where up is down, pigs have wings, and Dominion engaged in a colossal fraud to steal the presidency from Donald Trump by rigging the vote," the complaint states.

OAN founder Charles Herring did not respond to a message for comment. Byrne responded to a request for comment from the Associated Press by texting a graphic purportedly plotting election results from a Senate runoff in Georgia.

Brian Peterson, a spokesman for Newsmax, said the company’s 2020 election coverage was based on allegations made by the president, his advisers and members of Congress.

"Dominion’s action today is a clear attempt to squelch such reporting and undermine a free press," Peterson said in a statement to the AP.

Dominion’s technology was used in 24 states, including Georgia — the critical battleground that Biden won and which flipped control of the U.S. Senate. It has faced a barrage of claims by Trump allies and supporters, including that the company was created in Venezuela to rig elections for the late leader Hugo Chavez and that it has the ability to switch votes.