UPDATE -- Jeffrey Almes and Layla have been reunited.  He says he was leaving a meeting with detectives to look at photos of suspects thanks to tips that have come into Crime Stoppers of Puget Sound after the case was featured this past weekend on Washington's Most Wanted when he was contacted by a man who saw a post on Facebook and recognized Layla.
He told Jeffrey he found her outside without tags and had been taking care of her for weeks.   Jeffrey went and got Layla and two have been reunited.  He says she is still really excited to back with her human.
WANTED IN SEATTLE --
The search is on for a stolen dog and the two suspects who stole her.

Surveillance video from the Hilltop Market on Capitol Hill shows one suspect unhooking her leash as the other guy punches the victim in the chest, knocking him down. The suspect then leads Layla out by her collar.

Now, Seattle Police are asking for your help to identify the two men.

The victim, Jeffrey Almes has spent the last three weeks searching for his beloved dog. The two have been together for nearly a decade. 'She`s the most important thing in my life,' said Almes. 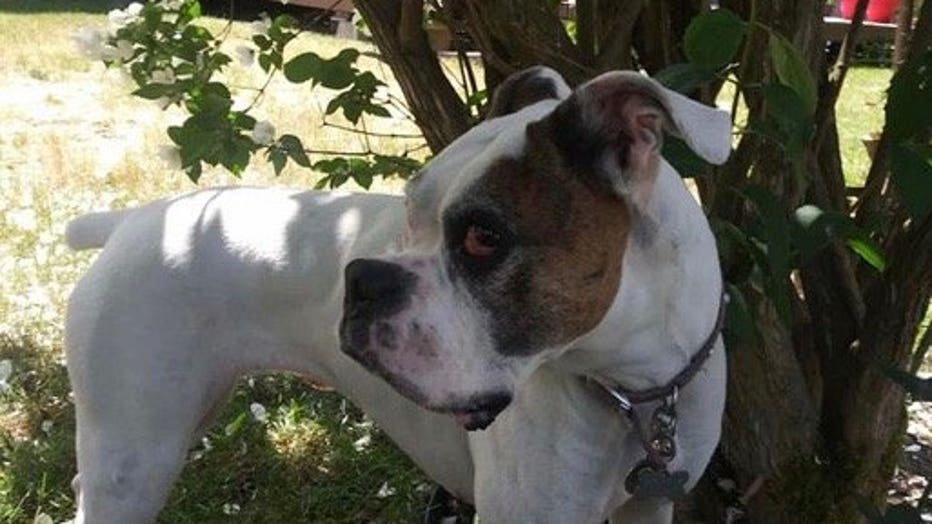 When officers arrived, Jeffrey was crying and gasping for air -- his heart broken. “There was something different with her. I know people say that, but we had a kinship,” said Almes. He says he and Layla did everything together. Jeffrey says he always had Layla with him. 'I just think about it, ‘Why didn`t I just leave her at home?’ It`s because I feel safe with her,” said Almes.

Seattle robbery detectives are hoping somebody can identify the suspects, or help locate Layla. “Somebody watching the video knows who these people are. They probably frequent that store on a regular basis. So far, we haven't been able to identify either one of them. There's a good chance they have taken the dog and given her to somebody else to hold for them. Maybe somebody else is walking this dog, so somebody knows where the dog is, somebody knows the suspects. That's the information we need,” said Ret. Det. Carner.

Layla is more than a pet for Jeffrey -- she`s his support dog. He was injured recently in a car accident and still recovering when he was attacked. Now, he's also dealing with the emotional pain of losing his best friend, “She had such a happy home.”

The first suspect who took Layla is white, 6 feet tall, 180 pounds with two ponytails. He was wearing a black T-shirt.

The second suspect who punched the dog's owner in the chest, knocking him down is black, about 5’3”, with a medium build and bald under that baseball cap.

If you recognize the suspects, or know where to find Layla, use the P3 Tips App on you smart phone that you can download for free to submit their names to Crime Stoppers and Seattle Police, or call the hot line at 1-800-222-TIPS(8477). It's anonymous -- you never have to give your name -- and you'll get a cash reward of up to $1,000 if your tip helps lead to any arrests in the case.