RICHLAND, Wash. -- The Department of Energy is considering a plan to remove some of the radioactive waste from leaking tanks at the Hanford nuclear site and send it to a storage facility in a deep salt mine in New Mexico.

Gov. Jay Inslee, who toured the Hanford site Wednesday, said he’s pleased that some progress is being made.

“We deserve the federal government to step up to the plate and do its job, and it`s doing that today.  We appreciate (Energy) Secretary (Steven)  Chu getting on this. But we`re going to be insistent that this job gets done.”

According to the Albuquerque Journal, the DOE proposal would send as much as 3.1 million gallons of Hanford waste to the Waste Isolation Pilot Plant in southeast New Mexico,  where radioactive waste since 1999 has been disposed of in a deep salt mine burrowed in the desert east of Carlsbad, N.M. 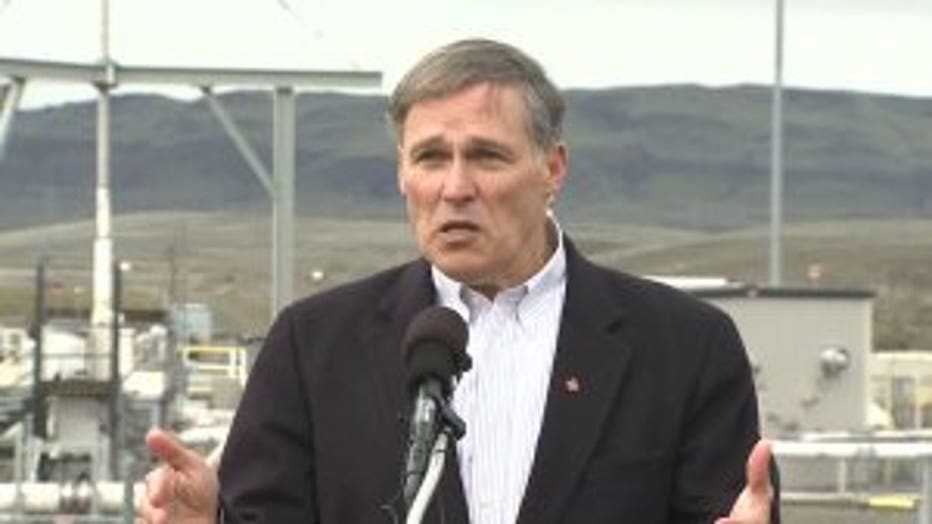 "The New Mexico Environment Department (NMED) has been informally notified by the Department of Energy (DOE) of their intent to submit a request for a Waste Isolation Pilot Plant (WIPP) permit modification that would allow the Hanford Nuclear Reservation to ship approximately 3-million gallons of processed radioactive transuranic waste from the Hanford site to WIPP near Carlsbad. NMED has not yet received the formal WIPP permit modification request. All WIPP permit modifications are thoroughly evaluated on technical merit and for compliance with applicable laws and regulations."

The plan to ship some of the waste to New Mexico is just in its infancy, with logistics and New Mexico’s permission still up in the air.

And there’s another wrinkle – sequestration could force $171 million in federal cuts at Hanford.  The largest part of those cuts would be in underground management.  Leaks were recently discovered in six of those tanks.

The Department of Energy, however, said there is no imminent danger to the public from the leaking tanks.

The DOE's Tom Fletcher, who helps oversee the federal tank monitoring program, said "from data we have from past leaks, it takes between 20, 30 and 50 years to reach the groundwater, because we have 250-300 feet of soil from where that tank leaked is to where groundwater is."