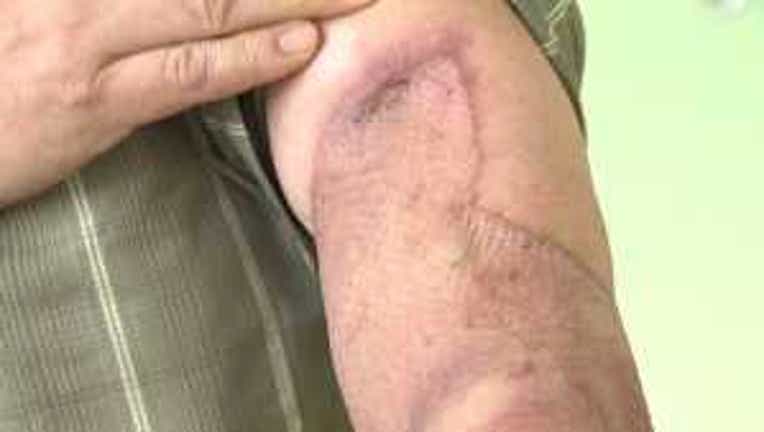 Ruben Pereyra of Juneau, Alaska, who is being treated in Seattle, shows what the flesh-eating bacteria had done to his left arm. (KCPQ-TV/Seattle)

But that's exactly what happened when Pereyra, a bus driver from Juneau, Alaska, scraped his knuckle while removing a metal shelf at his home.

"When we went to the ER for a third time, they did a blood test and that's when they found out I had something more serious," Pereyra said.

He had a flesh-eating bacteria, also known as necrotizing fasciitis. And  it was eating away at the soft tissue in his hand and arm.

Doctors at Harborview had to work fast.

According to the Centers for Disease Control and prevention, the bacteria is rare, with between 9,000 and 11,000 cases in the United States each year. About 1,000 people die from it.

Aimee Copeland, a college student in Georgia, contracted the bacteria after falling off a zip line and cutting her leg. Doctors had to amputate most of her hands, one of her legs and her remaining foot in an effort to save her life.

In Washington state, 6-year-old Jake Finkbonner cut his lip during a basketball game in 2006 and he got a flesh-eating bacteria.  After many skin grafts, Jake is doing much better, but doctors said they need more tools.

Harborview is part of nationwide clinical trial testing the drug AB-103. Of the 40 patients in the study, 24 of them are at Harborview. Pereyra got the highest dose.

"So far, they've saved my life.  They saved my arm, and now we're working on the fingers," he said.

Pereyra has had six surgeries and still doesn’t have full control of his left hand.  But he calls his doctors “angels.”

"Any time you get a skin infection, you should see a doctor and make sure they start you on antibiotics and investigate it,” Bulger said.

Doctors say if a cut or scrape gets red and doesn't improve, even after taking antibiotics, go to the emergency room and have it checked out.

AB-103 is in its second phase of trials and will need a larger study before getting FDA approval.