Police say at least 6 fires were set intentionally under the span of an hour. The suspect was arrested for two of those fires, though more charges may be pending.

REDMOND, Wash. - King County Prosecutors (KCPAO) have charged a man who they say intentionally set several fires in downtown Redmond at apartment buildings and businesses-- all within the span of an hour.

Redmond Police and firefighters responded to six fires they say were intentionally set on July 29.

According to court documents, the fires unfolded as follows (all in the span of under an hour) 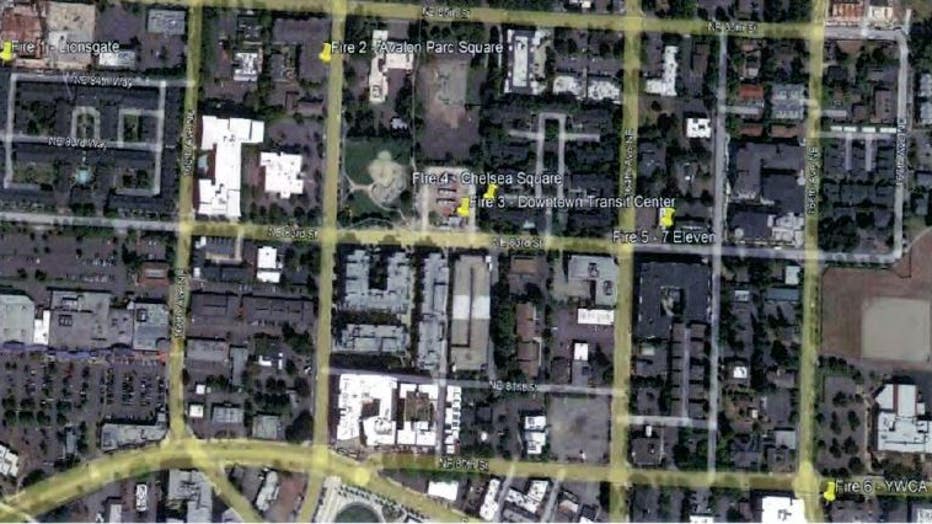 After looking at area surveillance footage, police saw a "suspicious man" appear at different locations where the fires were.

Around 1:19 p.m., Two Redmond police officers radioed in that they were with a man who matched the suspect's description.

The two officers were with the man, who was identified as 29-year-old Tanner Pipkin, near the Chelsea Square Apartments and the adjacent 7-Eleven on NE 83rd Street. According to court documents, Pipkin had a long butane lighter sticking out of his front pant pocket.

Pipkin was then detained on suspicion of starting the fires, but he denied his involvement.

Court documents say that at the time, he had an active warrant for his arrest for a theft incident. He was arrested on that warrant.

Although firefighters responded to six fires in that area, Pipkin has been charged for two of the fires. However, prosecutors say more charges could be pending as the investigation continues.

"The defendant’s act of lighting a random, occupied dwelling on fire illustrates the extreme danger that he poses to the public. In addition, by setting multiple fires the defendant increased the possibility that emergency responders would not be able to get to all of the fires before they spread. Substantial bail is appropriate to protect the community. … The State [the King County Prosecuting Attorney’s Office] requests that bail be set at $750,000, as was set at the probable cause hearing, based on the likelihood that the defendant will fail to appear in response to a summons or that he may commit a violent offense," the KCPAO said.

According to court documents, Pipkin also has had previous convictions for criminal trespass and theft. Court documents say Pipkin has had approximately nine warrants for his arrest for failing to appear in court since 2020.