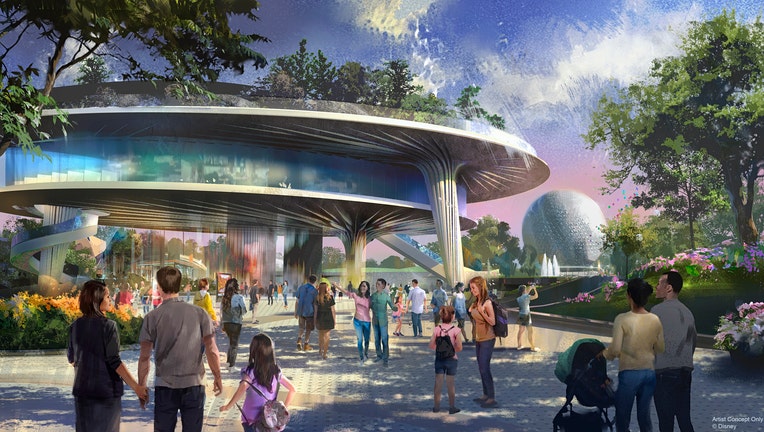 Epcot at Walt Disney World Resort in Florida is undergoing a historic transformation, bringing the next generation of immersive storytelling to life through a plethora of new attractions and experiences. A new pavilion will be home base for Epcot’s s

Disney unveiled new details about its multi-year transformation of Epcot, its upcoming innovative Star Wars hotel, and several other attractions coming to its parks across the globe during a two-hour panel at the company's D23 Expo in Anaheim over the weekend.

Details included updates on a Spider-Man ride coming to Disney California Adventure Park, a Moana attraction and an overhaul of the Epcot theme park in Florida.

Here's a breakdown of the major announcements:

A Starcruiser with fabulous views 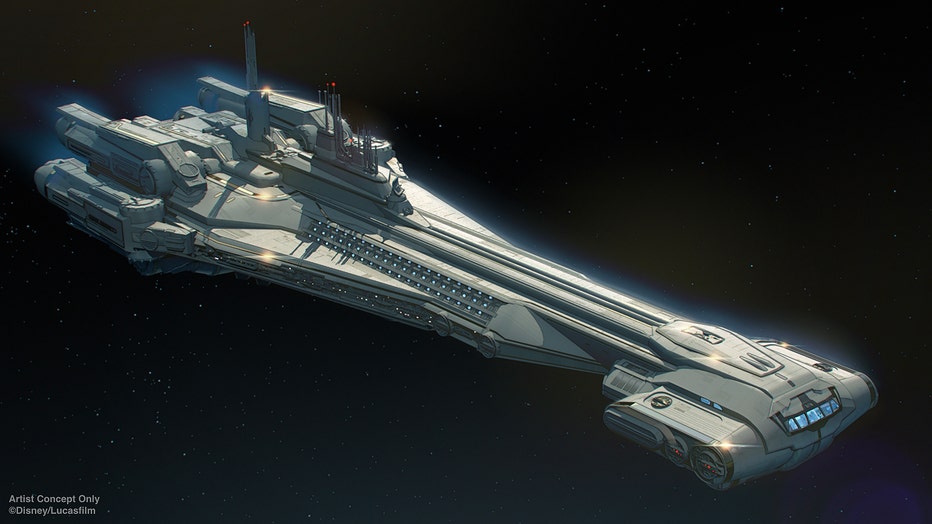 Star Wars: Galactic Starcruiser at Walt Disney World Resort in Florida will invite guests aboard the Halcyon, a starcruiser known throughout the galaxy for its impeccable service and exotic destinations. Onboard, they will stay in well-appointed cabi

Visitors to Disney's "Star Wars"-themed land in Orlando can stay immersed in a galaxy far, far away by spending two nights in a themed hotel that will be called "Star Wars: Galactic Starcruiser."

In the "Star Wars" hotel concept in Orlando, guests will board the Halcyon, a "legendary ship with an unparalleled level of service," said Ann Morrow Johnson, creative director at Walt Disney Imagineering.

Resembling the experience of taking a cruise, guests check in at a terminal at Walt Disney World and enter a launch pod for a simulated trip into space to board the Starcruiser.

Once there, visitors interact with an alien crew, learn about the ship's navigation and defense systems and train with a lightsaber. They'll also enjoy a "port day" at Batuu, the fictional planet of Disney's "Galaxy's Edge" land opening at Disney's Hollywood Studios in Orlando this week. (Disneyland's "Star Wars" land is already open.)

Disney has emphasized the interactivity of the new "Star Wars" land, and the hotel extends that idea. The choices made on the Halcyon "affect how your 'Star Wars' story unfolds," Johnson said.

Many details about the hotel have yet to be announced: Disney did not reveal when it would open, how many rooms it will have or its galactic prices. The company did note that every room will have a stellar view -- a digital screen that looks out into the cosmos). 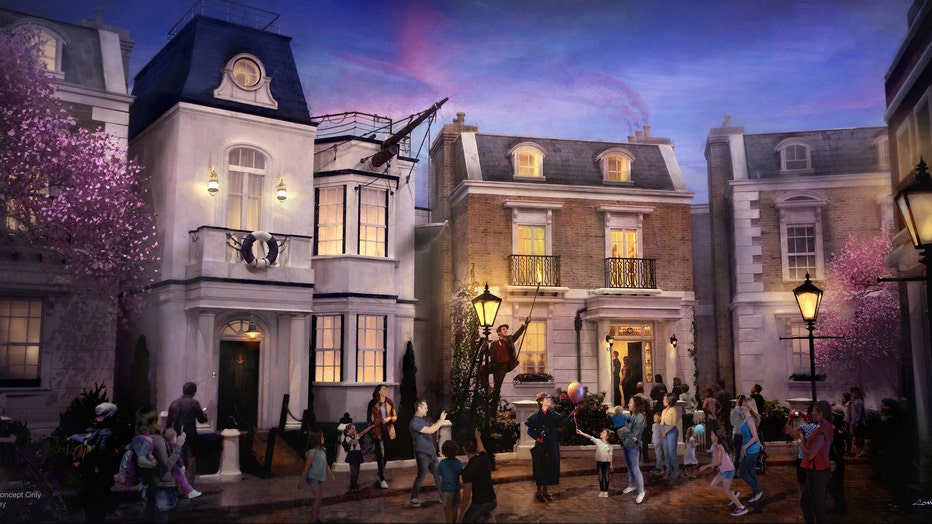 Epcot’s United Kingdom pavilion will welcome the first attraction inspired by Mary Poppins. Guests will step in time down Cherry Tree Lane past Admiral Boom’s house, then enter Number 17, home of the Banks family, where their adventure will begin. (D

Beyond "Star Wars," Disney outlined major developments to Epcot, which opened in 1982 as a futuristic World's Fair. To revitalize the aging park, Disney revealed a slew of plans: a Moana attraction called "Journey of Water," a Mary Poppins attraction in the United Kingdom pavilion, and an overhaul of the 37-year-old "Spaceship Earth" ride, housed inside the park's iconic geodesic centerpiece.

"Journey of Water, Inspired by “Moana” will be the first experience inspired by the hit Walt Disney Animation Studios film. This lush exploration trail will invite guests to meet and play with magical, living water. The water will have a life of its own – just like Moana’s friend, the ocean – and guests will learn about the importance of the natural water cycle." 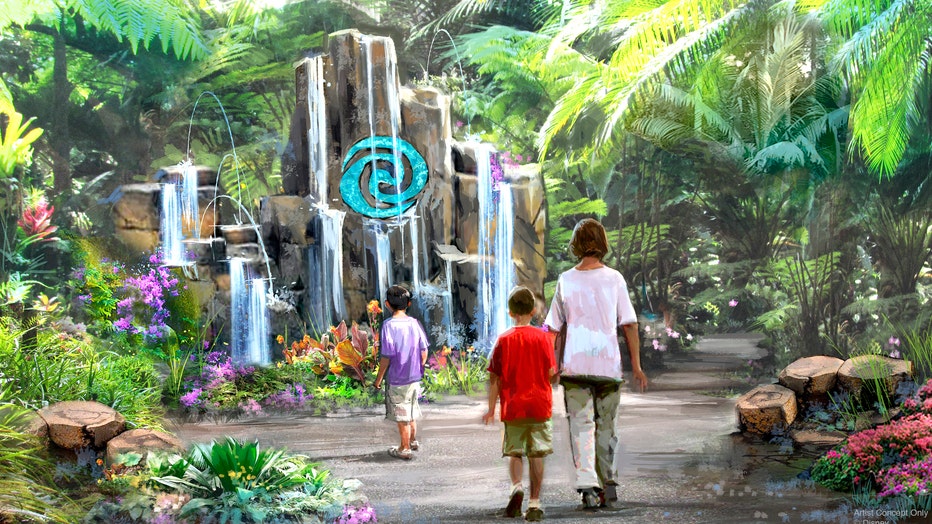 Journey of Water, Inspired by “Moana” at Epcot will be the first attraction inspired by the hit Walt Disney Animation Studios film. This lush exploration trail will invite guests to meet and play with magical, living water. (Disney)

The park is also being reorganized into four neighborhoods: World Discover, World Nature, World Celebration and the existing World Showcase.

"Epcot will be unified with four neighborhoods that each speak to important aspects of the world and its people: World Showcase, World Celebration, World Nature and World Discovery. These neighborhoods will be filled with new experiences rooted in authenticity and innovation that take guests to new destinations, where the real is made fantastic in a celebration of curiosity, hands-on wonder and the magic of possibility." 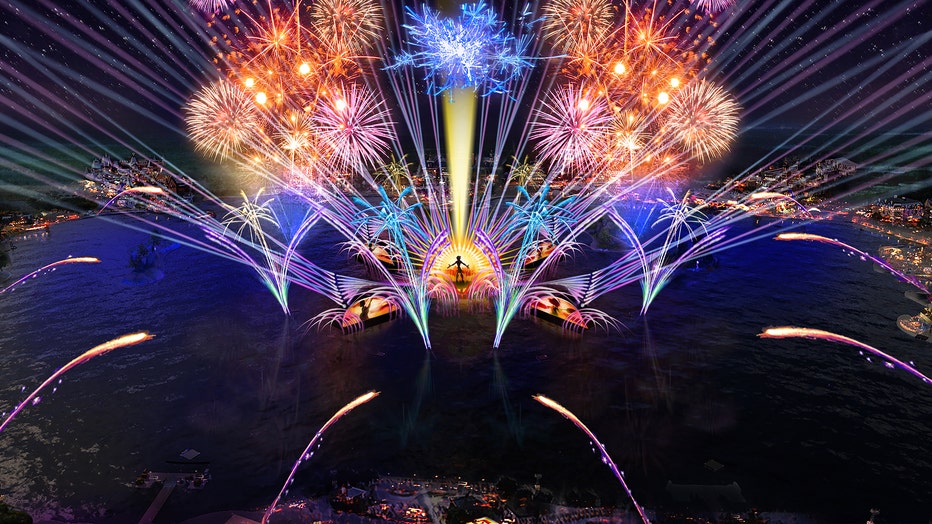 In 2020, the new “HarmonioUS” will debut at Epcot as the largest nighttime spectacular ever created for a Disney park. It will celebrate how the music of Disney inspires people the world over, carrying them away harmoniously on a stream of familiar D

Epcot, which some fans think has lost its direction in recent years, is undergoing "the biggest transformation of any park we've ever accomplished," according to Bob Chapek, Disney's chairman of parks, experiences and products.

The new Epcot will be "more Disney, more family, more timely and more relevant," he said.

"Guests will be able to visualize these exciting plans for Epcot when doors open Oct. 1, 2019, for Walt Disney Imagineering presents the Epcot Experience in the Odyssey Events Pavilion. They will discover engaging and interactive exhibits that showcase the relentless innovation, energy and excitement driving the park’s future throughout this unprecedented period of transformation."

Marvel to play a starring role 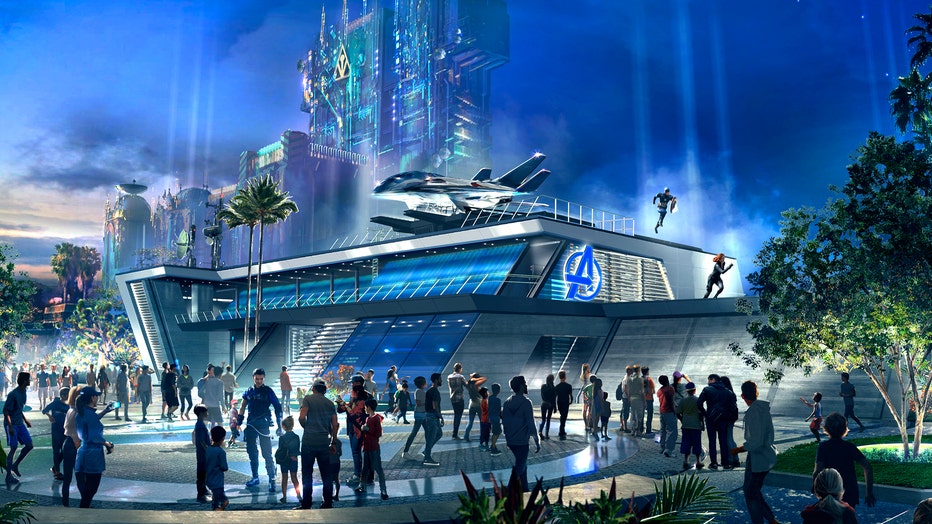 Guests can suit up alongside their favorite Super Heroes at the Avengers Campus, beginning in 2020 at Disney California Adventure park at Disneyland Resort. The campus will feature the first Disney ride-through attraction to feature Spider-Man, along

Marvel is going to play a bigger part in Disney theme parks, connected by a single story arc across several international properties.

But don't expect an "Avengers Campus" to open a location at the flagship Walt Disney World resort in Florida: a 1994 agreement gave Universal Studios exclusive rights to operate a Marvel-themed land east of the Mississippi River.

In another awkward intellectual property dispute, Disney revealed a Spider-Man ride coming to "Avengers Campus," despite the recent news that the Disney's talks with Sony to renew film rights to Spider-Man fell through. In the ride, guests "sling webs to help Spider-Man collect Spider-Bots that have run amok." 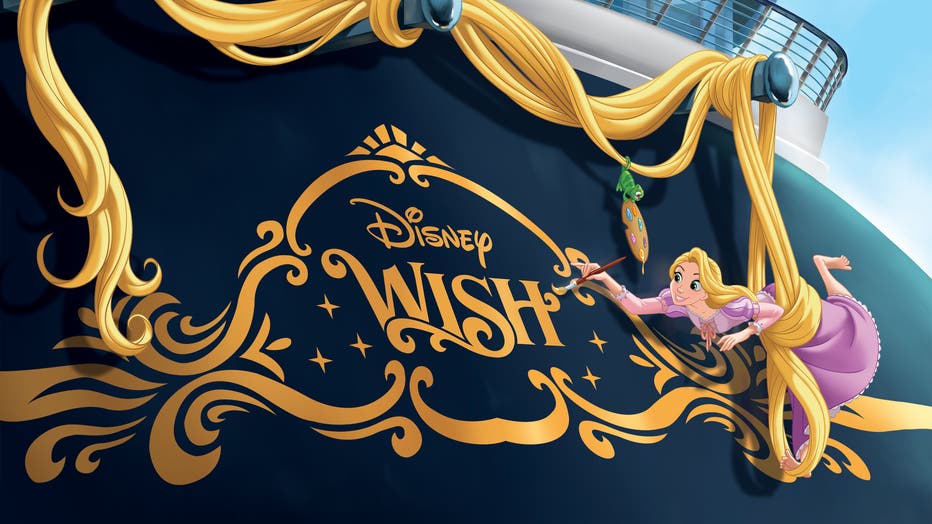 A beloved hallmark of Disney Cruise Line, it has been a tradition to adorn the back of Disney ships with an iconic character that reflects the theme of each vessel. The Disney Wish’s stern will feature Rapunzel. Our favorite artsy princess, paintbrus

Chapek announced the first of the three ships – the Disney Wish – will be delivered in late 2021 and will set sail in January 2022. Rapunzel will grace the stern of the new vessel.

“With three new ships joining our fleet, we thought this would be an incredible opportunity to add another unique destination to our ports of call. We looked all over The Bahamas and Caribbean for an ideal location that would enable us to create new experiences, while celebrating the culture of this amazing region,” Chapek said.

"The three new ships will be powered by liquefied natural gas and, at approximately 144,000 gross tons and 1,250 guest staterooms, will be slightly larger than the Disney Dream and Disney Fantasy." 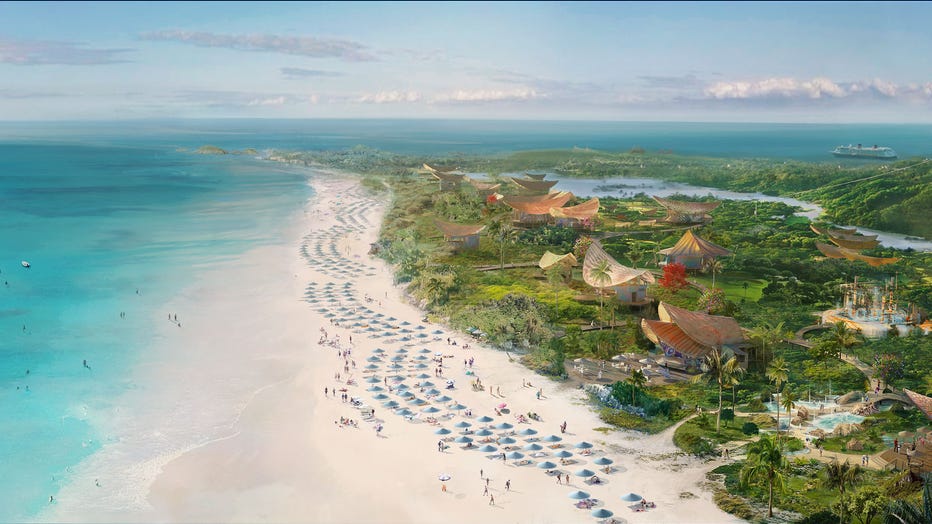 Disney Cruise Line guests can look forward to a signature island experience that celebrates nature and the spirit and culture of The Bahamas at a new Disney port of call, which will be located on the breathtaking island of Eleuthera at a place called

Disney also unveiled details about a new island experience in The Bahamas at a new Disney port on the island of Eleuthera called Lighthouse Point.

Disney Cruise Line completed its purchase of Lighthouse Point earlier this year. Construction could begin in 2020 with completion in late 2022 or 2023.

Disney Genie to show you the way 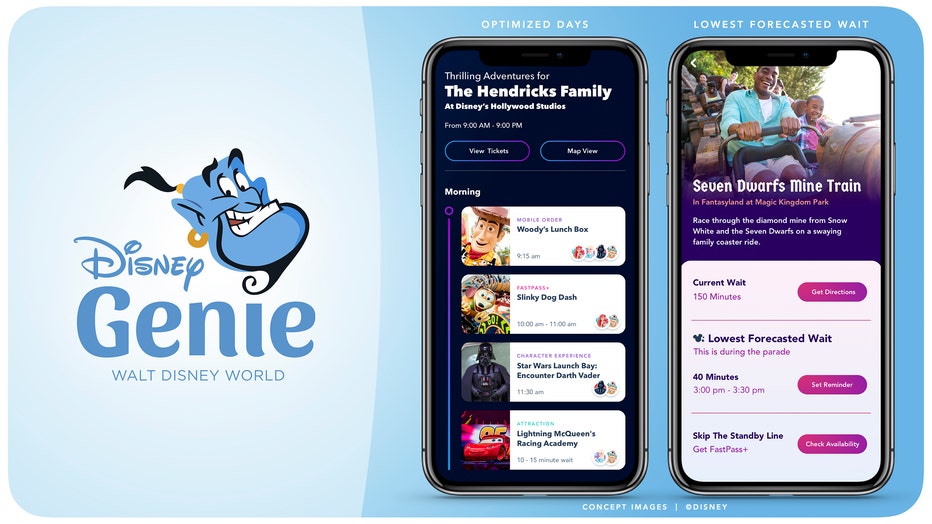 "Disney Genie will make planning easier and more fun by providing guests customized itineraries geared to princesses, thrill seekers, foodies, families and more. Guests will even be able to tell Disney Genie what they want to experience, and it will quickly evaluate millions of options to present them with an optimal day."