Marysville Police continue searching for two suspects involved in a homicide over the weekend.

MARYSVILLE, Wash. -  30-year-old James Flowers was arrested early Tuesday morning (Nov. 17) at a motel in Mountlake Terrace. He was booked into the Snohomish County Jail on first-degree murder and robbery charges.

Lyon “Nick” Torns, 36, who was wanted on a murder warrant, turned himself in to police in Las Vegas Monday evening (Nov. 16).

“I thank you all for your help. Our boys and I can now sleep better at night knowing they are found and in jail. Now, I pray justice will be served for my husband’s murder,” said Kat Castle, wife of victim Jason Castle.

Marysville Police are asking for your help to identify a second man caught on video at the scene of Jason Castle's murder on Sunday morning.

Detectives have confirmed that the video released yesterday is "Nick" Torns, the other man wanted for questioning. 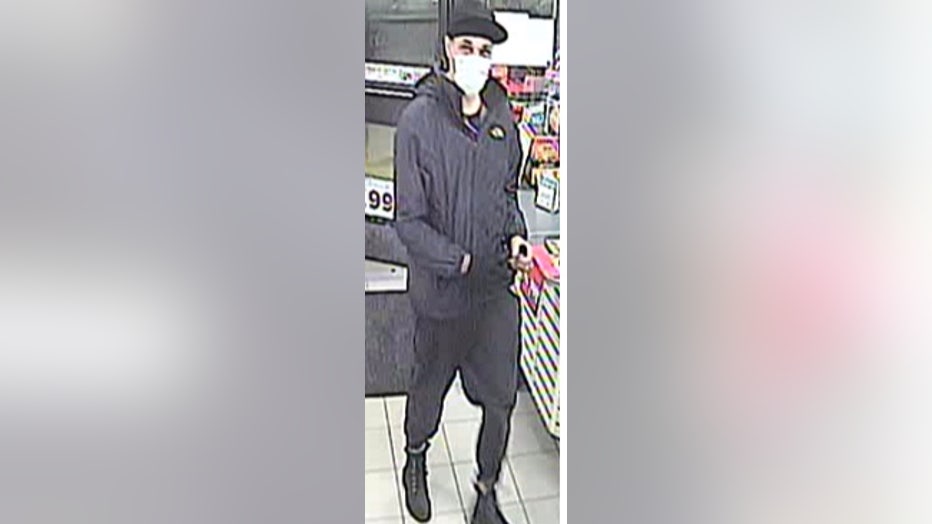 Detectives obtained this security video footage from a convenience store near the scene of the homicide. In this footage, the black Nissan Altima used in the murder (now impounded) is seen parking in front of the store doors and the below-pictured individual exits the driver’s seat and enters the store.

The subject purchases cigarettes and exits the store shortly before police received a report of gunshots near what was revealed to be the scene of Castle’s murder. This man is wanted for questioning in the ongoing homicide investigation and is suspected to be the driver of the Nissan Altima as it fled the crime scene.

Police say he appears to be about six feet tall, wearing a black baseball cap with a black bandanna underneath, a dark blue North Face jacket, black sweatpants, black work boots, and there appears to be a small mark or tattoo on the left side of the subject’s neck.

It is unknown if he is armed, but should be considered dangerous. If you know or spot this person, do not approach them. Call 911 and report your sighting or tip to the police immediately. If you have additional information about this case, you can also submit an anonymous tip to Crime Stoppers through the P3 Tips app on your cell phone or at 1-800-222-TIPS for a $1,000 cash reward.

The family Jason Castle, who was shot and killed, hold a vigil Monday night. Marysville Police continue to search for Nick Torns and to identify a second suspect seen in surveillance video captured the night of the homicide.