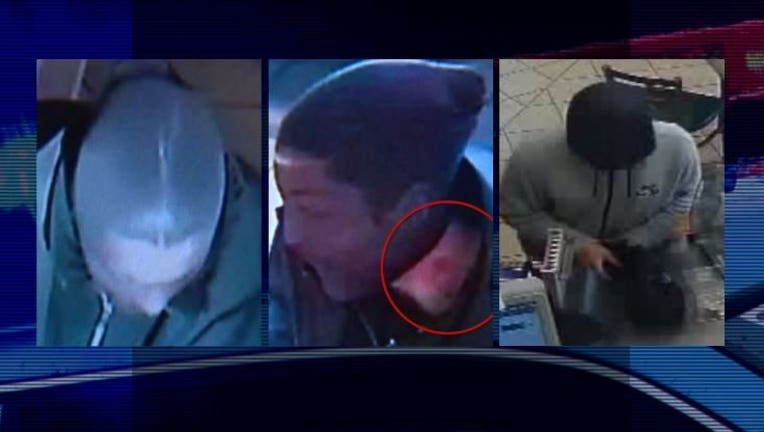 SEATTLE -- King County Sheriff's detectives and Seattle Police are asking for your help to identify a serial armed robber who has hit three times so far. His face was covered with a nylon stocking in each case. The suspect loiters outside until other customers leave before entering and then points a black pistol at the clerks and demands money.

Retired Detective Myrle Carner explains the robber's heist at the Subway in Lake City. "He comes in. He's fully-covered from the face-up, pretty distinctive clothing, really unique tennis shoes. He comes in, he approaches the clerk on duty, immediately produces a very large gun. He point it, if you look close at the video his finger's inside the trigger guard, it tells me from experience, five pounds of pressure and that gun's going to go off. He point it at the victim, there's a little bit of a wondering if the clerk understands, so you actually see him backup, hold his hands-up, like 'put your hands up,' while he's doing that he tucks the weapon under his arm and then he approaches the till again. You watch closely, he's got the long-sleeved shirt, he actually pulls the shirt over his hands, so he doesn't want to leave any DNA, or prints, that tells me it's not his first rodeo, so to speak."

The suspect left on foot in each case and no vehicle has been seen.


Detectives describe the suspect as White, Asian or Mixed Race with dark hair parted in the middle, 5 feet 10 inches tall with a medium build, no obvious tattoos on his hands or legs but he does have a discoloration or marking on the left side of his neck.

If you can identify this suspect, Crime Stoppers of Puget Sound will pay you a cash reward of up to $1,000. It is guaranteed to be anonymous. Submit the information at www.P3Tips.com or by downloading the P3 Tips App to your cell phone for free. You can also call 1-800-222-TIPS (8477).