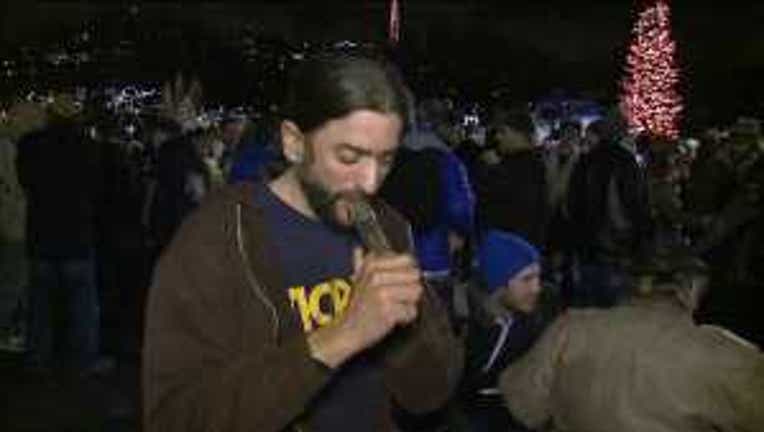 Boston resident and professional sociologist Keith Saunders of NORML lights up his bong at the Seattle Center.

One of the celebrations was at the Seattle Center, near Seattle’s iconic Space Needle.

Those attending said they see the celebrations as a release of the social pressure that has been caused by 80 years of prohibition and restrictions rather than a demonstration of civil disobedience.

Make no mistake, the pot smokers who are not medical marijuana patients are facing tough choices – they can possess it, but they can’t buy it legally or grow it legally yet.

Keith Saunders, a sociologist whose work focuses on drug policy and who is a member of the board of directors of the National Organization for the Reform of Marijuana Laws, or NORML, said, “This is kind of like what happened when alcohol prohibition ended.  The people had a public display of their happiness of being free."

Saunders flew into Seattle from his home in Boston to be part of the celebrations.

So now people in the crowd have to figure out how to get their marijuana, but they said they don't anticipate a problem with supply.

"I'm going to find my friend with a medical card and have him get it for me,” said one pot smoker who gave her name only as Rose.

Unfortunately, under the new law, giving away legally obtained medical marijuana by a patient is also illegal.

"I mean it grows from the earth and it's everywhere,” said Jason, another pot smoker at the event. “ I mean, it was here before we were so it's gonna be here after, it's everywhere, man.”

And that's the problem.  In order to possess it legally, one has to get it illegally – until the state Liquor Control Board sets up the rules and regulations for the legal growing and selling of pot from retail stores. That’s not expected to occur before December 2013.

"There's no question that this initiative is groundbreaking and it puts Washington state at the forefront of national efforts to legitimize marijuana but the law is not perfect,"  King County prosecutor Dan Satterberg said.

"I think the black market that has always been around marijuana will continue to thrive until and unless the state actually does the next step of the law, which is for the Liquor Board to license the growing and retail sale of marijuana,” Satterberg said. “Until then, people are still going to get pot wherever they used to get it."

Saunders, the NORML official, said, "Maybe this is the beginning of the first steps where we can finally control marijuana through proven means that are effective and don't require people being treated as criminals."

Everyone at the smoking celebration Thursday night was breaking the law because while it is legal to possess pot and smoke it in private, it is illegal to smoke it in public.

Seattle police say they plan to issue verbal warnings only, when violators are spotted.