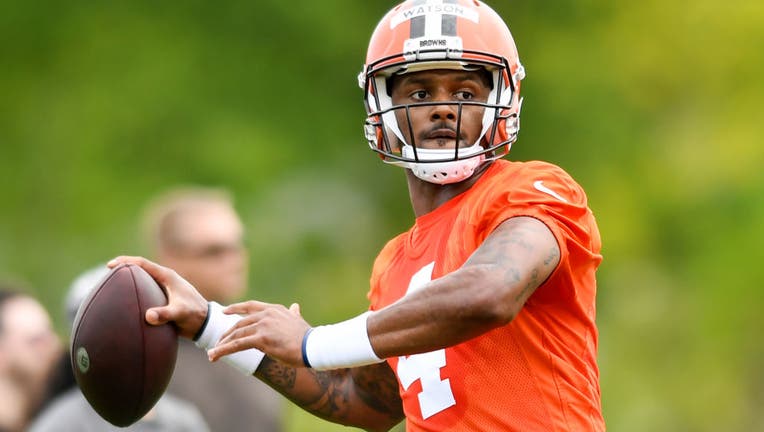 BEREA, OHIO - MAY 25: Deshaun Watson #4 of the Cleveland Browns looks to pass during Browns OTAs at CrossCountry Mortgage Campus on May 25, 2022 in Berea, Ohio. (Photo by Nick Cammett/Getty Images)

All but four of the 24 civil lawsuits against Cleveland Browns quarterback Deshaun Watson have been settled, attorney Tony Buzbee says.

Buzbee represents the massage therapists accusing Watson of sexual assault and harassment during private sessions when he played for the Houston Texans.

In a statement, Buzbee said the terms and amounts of the settlements are confidential.

A majority of the lawsuits against Watson were filed last year, but two more were filed within the last month.

Buzbee released the following statement about the settlements:

"The cases against Deshaun Watson started with one phone call, from one brave and strong woman. That woman was Ashley Solis. At the time of that call she was just one of the hundreds of calls seeking legal assistance that our firm gets weekly. Even though she was originally turned away by our screening process, my staff insisted that I personally speak with her. I’m glad she persisted. Once we took a second look, and after having contact with Watson’s original lawyer who disrespected Ashley and her profession and who arrogantly minimized the conduct of someone he referred to as an "asset," I was convinced that our law firm should try to help her. As a result of Ashley’s lone but brave voice, soon many women who had allegedly experienced the same conduct were emboldened to step forward. I am incredibly proud to represent them all. They have endured vile criticism and fanatical ignorance. They faced withering cross examination by skilled litigators and stood firm. They are warriors all. Today we have an important announcement about these cases, but it is important to point out that, without Ashley Solis, the conduct experienced by these women would likely have continued unfettered. The truth is, without her courage and willingness to come forward, the NFL wouldn’t currently be contemplating discipline; there would be no examination of how teams might knowingly or unknowingly enable certain behavior; sports teams wouldn’t be reviewing their personnel screening processes; and this important story wouldn’t have dominated the sports headlines for more than a year.

Today I announce that all cases against Deshaun Watson, with the exception of four, have settled. We are working through the paperwork related to those settlements. Once we have done so, those particular cases will be dismissed. The terms and amounts of the settlements are confidential. We won’t comment further on the settlements or those cases.

As stated, Ashley Solis is one of the heroes of this story. Her case has not settled and thus her story and that of the other three brave women will continue. I look forward to trying these cases in due course, consistent with other docket obligations and the court’s schedule."

"I never assaulted anyone," Watson said following practice as the Browns held their mandatory minicamp. "I never harassed anyone or I never disrespected anyone. I never forced anyone to do anything."

MORE: All eyes on NFL’s pending decision regarding Deshaun Watson

But Watson could still be suspended if the NFL determines he violated the league’s personal conduct policy. The three-time Pro Bowler has been interviewed by league investigators, who will present their findings to disciplinary officer Sue L. Robinson. Commissioner Roger Goodell said last month the investigation was nearing a conclusion.

At the beginning of June, league spokesman Brian McCarthy said there was no update on the investigation or any timeline.