BELLEVUE -- Police said Seattle Seahawks fullback Derrick Coleman was traveling at a "high rate of speed" when he crashed into a car Wednesday evening in Bellevue. He then left the scene without rendering aid, police said.

Coleman was arrested Wednesday on suspicion of vehicular assault and hit-and-run.  The Seahawks have indefinitely suspended him from the team pending further information regarding the crash.

Coleman's agents suggested Coleman may have fallen asleep on his way home from Seahawks practice.

"While the facts of the case are still being determined, it seems  Derrick may have fallen asleep while driving home from a Seahawks’ facility," agents Derrick Fox and Mark Bloom said in a release. 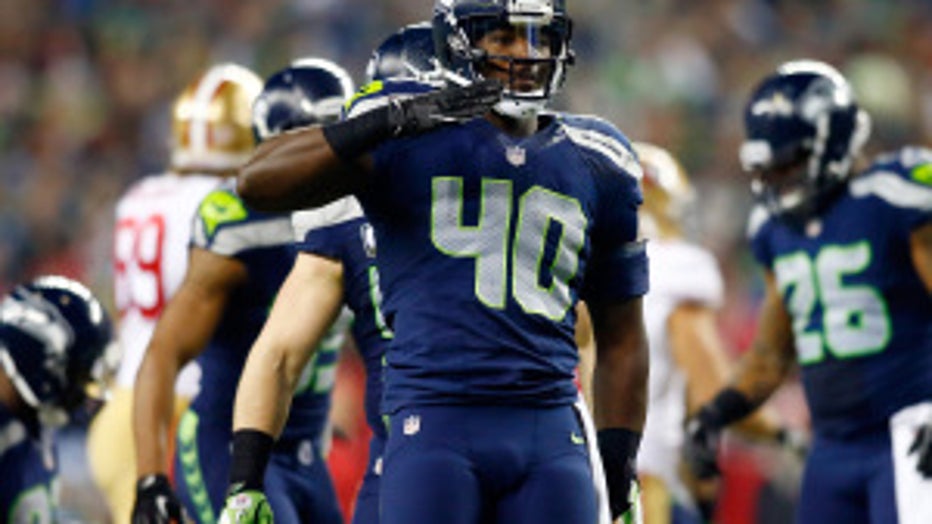 Bellevue Police Chief Steve Mylett briefed the media Thursday on the details about the crash and Coleman's subsequent arrest.

According to Mylett, Coleman was traveling at a high rate of speed around 6:20 p.m. Wednesday when he rear-ended a Honda Civic in the 13600 block of Southeast 36th Street. Coleman's truck pushed the Honda Civic up an embankment wall, turning it upside down. Coleman's vehicle flipped onto its side, Mylett said.

Witnesses at the scene helped Coleman out of his car. From there, Coleman allegedly ran or walked -- witness statements conflict -- from the scene. As police and emergency crews arrived at the scene, they rendered aid to the victim driver and searched for Coleman. He was found standing on the street a few blocks away.

It took officers "several minutes" to find him, Mylett said.

The driver of the Honda Civic was taken to Harborview Medical Center with serious but non life-threatening injuries.

Police interviewed Coleman about the crash, Mylett said, and he remained cooperative. He was arrested on suspicion of vehicular assault and hit-and-run.

Officers also administered a field sobriety test and later drew blood from Coleman to see if he was impaired at the time. Results of those tests are not yet available.

Coleman is in the King County Jail awaiting his first court appearance.

Derrick Coleman's agents, Derrick Fox and Mark Bloom, issued a statement regarding the crash. They suggested Coleman fell asleep at the wheel while driving home from a Seahawks facility.

Here is the full statement:

BELLEVUE, Wash., October 16, 2015 – On the evening of October 15, 2015, Seattle Seahawk Fullback Derrick Coleman, Jr. was involved in a two-car collision soon after leaving a team meeting.  While the facts of the case are still being determined, it seems  Derrick may have fallen asleep while driving home from a Seahawks’ facility.

The health and well-being of all involved is our primary concern, and we are thankful to report that both parties are expected to make a full recovery. We will continue to work closely with the local officials while a full investigation is being conducted. . .

Signed by the Seahawks in December 2012, Coleman has essentially been deaf since the age of 3. He is the author of a book called “No Excuses: Growing Up Deaf and Achieving My Super Bowl Dreams” that was published this summer.

Coleman has one yard on two carries this season.