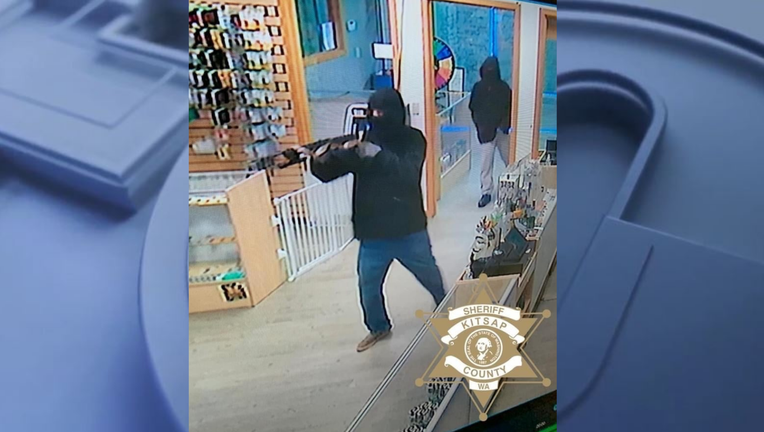 PORT ORCHARD, Wash. - Kitsap County deputies are searching for two suspects after a robbery at a marijuana shop in Port Orchard.

Investigators said the two armed suspects robbed a store in the 1700 block of Village Lane on Friday at 10:50 p.m.

The suspects forced two employees into the back room where one employee was hit with the butt of a shotgun. That employee's Chihuahua named Teeka was so frightened that she took off out the door and was missing for some time.

Thankfully, Teeka was found by a family not far from the shop, who reunited the pup with her owner.

The suspects fled in a stolen car with an undisclosed amount of money. Deputies said the car was found.

Deputies described one of the suspects as a white man, 6 feet to 6 feet 2 inches tall, 180 pounds, wearing a black jacket, blue jeans and tan Adidas-style shoes.

The second suspect is described as an unknown race or gender, about 5 feet 8 inches tall, 150 pounds, wearing a black hoodie, gray sweatpants and black shoes.

Detectives are looking for any information about the suspects. Anyone who can identify or has information is asked to call Det. Eric Adams at 360-337-4998.

You can also submit an anonymous tip to Crime Stoppers of Puget Sound through the P3 Tips App on your cell phone or call 1-800-222-TIPS (8477). There is a cash reward offered of up to $1,000 for information that leads to an arrest in the case.

These pot shop robberies are continuing at a record rate. FOX 13 recently aired a special called 'The Spotlight: Pot Shop Robberies' highlighting the reasons why the shops are being hit and the changes to the laws that owners and employees want as well as information on what steps owners can take to protect their stores.

You can watch it below:

Amid a rise in pot shop robberies, police are trying to track down the bandits before someone ends up dead: "I got shot in the leg, I got shot through and through in the arm, I got shot through the abdomen." And legal marijuana dealers who pay billions in taxes are asking why the government put them in a bind and then turned a blind eye: "If we could take credit cards, everything would change overnight."