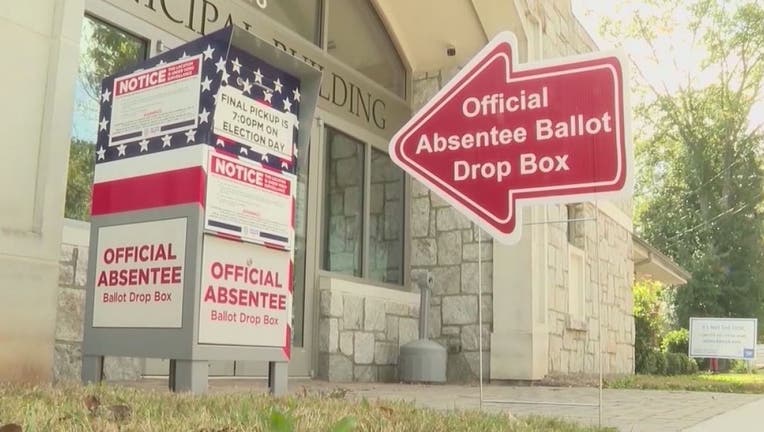 ATLANTA - The Justice Department has filed a federal lawsuit against the state of Georgia over its new voting law that includes restrictions on voting by mail and greater legislative control over how elections are run.

Attorney General Merrick Garland, Justice Department’s Civil Rights Division head Kristen Clarke, and others members of the department made the announcement about the lawsuit Friday morning.

The lawsuit targets Georgia's overhaul of its elections, which was signed by Georgia Republican Gov. Brian Kemp in March following record-breaking turnout that led to Democratic victories in the presidential contest and two U.S. Senate runoffs in the once reliably red state.

Garland said that the DOJ's lawsuit "alleges that recent changes to Georgia's election laws were enacted with the purpose of denying or abridging the right of Black Georgians to vote on account of their race or color."

The Georgia law requires a photo ID in order to vote absentee by mail, after more than 1.3 million Georgia voters used that option during the COVID-19 pandemic. It also cuts the time people have to request an absentee ballot and limits where ballot drop boxes can be placed and when they can be accessed.

At the press conference, Clarke said the law requires "new and unnecessary requirements" to request an absentee ballot.

Clarke also said the lawsuit will target a part of the law that makes it a misdemeanor to hand out "any money or gifts, including, but not limited to, food and drink" to anyone standing in line to vote. The prohibition extends 150 feet from a polling place and 25 feet from any person standing in line.

Republicans say the law is needed to restore confidence in Georgia’s elections. Democrats and voting rights groups say the law will disproportionately disenfranchise voters of color. Speaking after the bill was signed, President Joe Biden called such GOP efforts "un-American" and "sick.

As of mid-May, 22 restrictive laws had passed in at least 14 states, according to the Brennan Center for Justice, which researches voting and supports expanded access.

The increased enforcement of voting rights laws also signals that Biden and Clarke -- who was one of the nation's leading civil rights attorneys before her nomination to lead the department's civil rights division -- are making good on a promise to refocus the department around civil rights after a tumultuous four years during the Trump administration.

After the lawsuit's announcement, both Secretary of State Brad Raffensperger and Gov. Brian Kemp have responded, each one saying the lawsuit was based on lies.

"The Biden Administration continues to do the bidding of Stacey Abrams and spreads more lies about Georgia’s election law. Their lies already cost Georgia $100 million and got the President awarded with four Pinocchios" Raffensperger said. "It is no surprise that they would operationalize their lies with the full force of the federal government. I look forward to meeting them, and beating them, in court."

In his statement, Kemp also referenced Stacey Abrams saying that this lawsuit came after she, Biden and others "tried to force an unconstitutional elections power grab."

"This lawsuit is born out of the lies and misinformation the Biden administration has pushed against Georgia’s Election Integrity Act from the start," Kemp said. "Joe Biden, Stacey Abrams, and their allies tried to force an unconstitutional elections power grab through Congress - and failed. Now, they are weaponizing the U.S. Department of Justice to carry out their far-left agenda that undermines election integrity and empowers federal government overreach in our democracy. As Secretary of State, I fought the Obama Justice Department twice to protect the security of our elections - and won. I look forward to going three for three to ensure it’s easy to vote and hard to cheat in Georgia."