(CNN) -- Former basketball star Dennis Rodman has checked into an alcohol-rehabilitation center after facing backlash for his visit to North Korea.

"Dennis Rodman came back from North Korea in pretty rough shape emotionally. The pressure that was put on him to be a combination 'super human' political figure and 'fixer' got the better of him," his agent, Darren Prince, said Sunday in a written statement. "He is embarrassed, saddened and remorseful for the anger and hurt his words have caused." 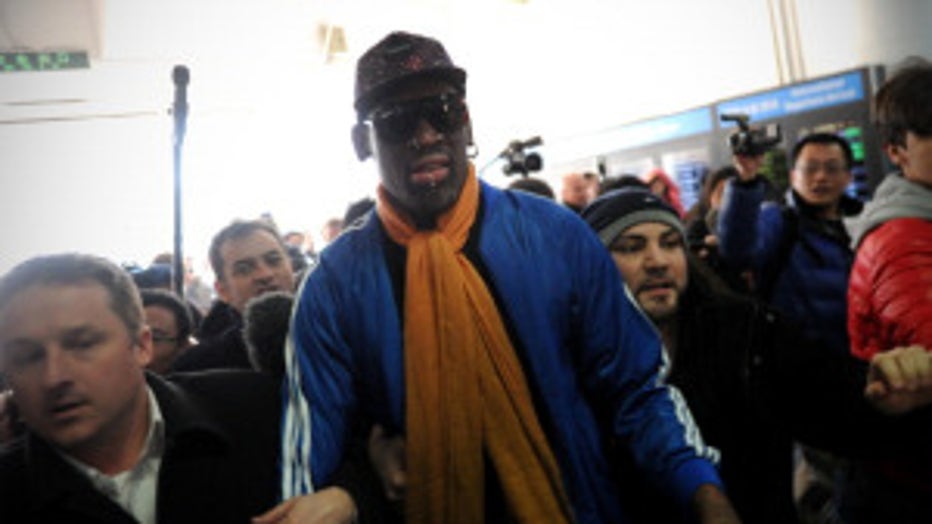 Prince said Rodman is at a facility in New Jersey, one with a "28- or 30-day" program. He said Rodman drank heavily in North Korea during a recent tumultuous trip to the secretive state to play a basketball game with some former NBA stars against national team players from the regime.

"His drinking escalated to a level that none of us had seen before," Prince said Saturday.

Rodman entered a center on Wednesday, a source close to him told CNN.

Rodman -- the colorful basketball Hall of Famer who won five NBA titles while the Detroit Pistons and Chicago Bulls -- said alcohol was one reason he shot from the lip earlier this month and told CNN that an American imprisoned in North Korea since 2012 may have done something to deserve his sentence of 15 years' hard labor.

After Kenneth Bae's family complained, Rodman apologized, saying he was under stress and had been drinking when he was interviewed on CNN's "New Day."

Some commentators have said Rodman's "basketball diplomacy" may have positive effects in North Korea by offering the people there a different view of the West, compared with its demonic portrayal in the country's tightly controlled state media.

But others, including human rights activists, say it's an embarrassing media sideshow that distracts attention from the North Korean regime's brutality. A State Department official said Rodman's visit was "marginally unhelpful" and Sen. John McCain said of the retired athlete, "I think he's an idiot."

Rodman, 52, led a team of former NBA players in a game in North Korea, which he called a birthday present to dictator Kim Jong Un, and, in a bizarre moment, sang "Happy Birthday" inside a packed sports stadium.

Upon leaving North Korea, Rodman was immediately criticized for his friendship with Kim. A mass of reporters met him at the Bejing airport and Rodman broke into tears while answering questions.

"I'm not the president," he told the reporters. "I'm not an ambassador. I'm Dennis Rodman."

Rodman also said, "I'm sorry for what's going on in North Korea, the certain situations," but he didn't apologize for his visit.

"Dennis is proud to be an American citizen and his trips to North Korea have been paid by sponsors," Prince said Sunday.

Rodman visited during a time of high tension between the two nations. North Korea has pursued a nuclear program, much to the United States' distress.

Rodman visited North Korea in February 2013 with three members of the Harlem Globetrotters basketball team. Kim was known to be an avid basketball fan while attending school as a teenager in Switzerland.