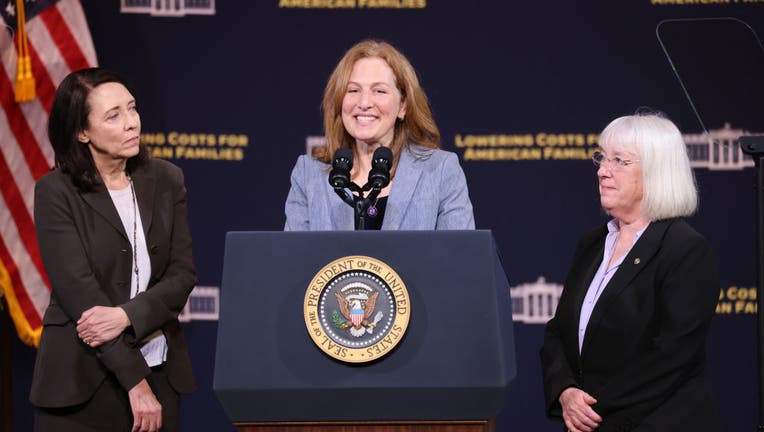 Marie Gluesenkamp Perez, an auto-shop owner who describes herself as an independent-minded Democrat, pulled off a victory against Joe Kent, a far-right "America First" ex-Green Beret who was endorsed by former President Donald Trump, in southwest Washington’s 3rd Congressional District.

Combined with Rep. Kim Schrier’s reelection to what Democrats feared was a vulnerable seat, Gluesenkamp Perez’s victory helped buoy party hopes of keeping a majority in the House.

"I am humbled and honored by the vote of confidence the people of Southwest Washington have put in me and my campaign," Gluesenkamp Perez said in a statement.

The 3rd District, which narrowly voted for Trump in 2020, had been represented for more than a decade by Republican Rep. Jaime Herrera Beutler. But she failed to make it through the state’s top -two primary after angering conservatives with her vote to impeach Trump following the attack on the U.S. Capitol by his supporters.

Schrier survived a challenge from Republican Matt Larkin to win a third term in the 8th District, which stretches from Seattle’s wealthy eastern exurbs across the Cascade Mountains to the orchard country of central Washington. Schrier, a pediatrician, in 2018 became the first Democrat to win the seat since its creation in the early 1980s.

"I don’t know which party will control Congress, but it’s races like mine — the ones that are sitting on a razor’s edge — that flip one way or another," Schrier told The Associated Press. "If more of them flip in this direction, that may mean we have the majority and set the agenda."

By flipping the 3rd District, which Democrats had not held since former Rep. Brian Baird retired in 2010, the party will now have eight of Washington’s 10 congressional seats. Herrera Beutler won 22% of the vote in the primary, and how her voters split between Gluesenkamp Perez and Kent may have been the deciding factor in the race.

Gluesenkamp Perez — who co-owns an auto shop with her husband just across the Columbia River in Portland, Oregon — said that as a small business owner who lives in a rural part of the district, she was more in line with voters than Kent, who repeatedly had to explain his connections to right-wing extremists.

Gluesenkamp Perez supports abortion access and policies to counter climate change, but also described herself as a gun owner who opposes an assault rifle ban, though she does support raising the age of purchase for such guns to 21. She wouldn’t be a "typical Democrat" in Congress, she said.

Kent, a former Green Beret who is a regular on conservative cable and podcasts, has called for the impeachment of President Joe Biden and an investigation into the 2020 election. He’s also railed against COVID-19 shutdowns and vaccine mandates and has called to defund the FBI after the search on Trump’s Mar-a-Lago home for classified documents.

In the 8th District, Schrier stressed results she’s achieved, including helping to secure money for road projects, rural broadband access and police body cameras. She also emphasized that as the only female doctor in Congress who supports abortion rights, she’s a bulwark against any GOP efforts to restrict abortion nationally following the U.S. Supreme Court’s decision to overturn Roe vs. Wade.

Larkin is a lawyer and former Washington attorney general candidate who works for his family’s company, which makes parts for water pipes. Unlike more extreme Republican candidates, Larkin says Biden was legitimately elected, though he also notes that many people disagree and are frustrated about it. He hammered Schrier on inflation, gas prices and crime, saying Democrats’ policies have aggravated all three.