Delta passengers and flight attendants worked together to detain an unruly passenger, causing the flight to make an emergency landing. (Credit: Jukin Media)

LOS ANGELES - Video captured frightened Delta passengers on a flight from Los Angeles to Atlanta when an unruly passenger decided to cause a disturbance in the middle of the journey, forcing an emergency landing.

Video footage recorded on June 11 on Delta Flight 1730 shows a dark cabin with several people standing near one of the plane exits where a commotion ensues.

A man can be heard saying, ‘Stop,’ as a woman started yelling, ‘Help! Help!’ after an unidentified man appeared to jostle around, attempting to break free from the other passengers who were trying to get him under control.

The unidentified male passenger became so disruptive, it prompted several additional passengers on board to spring into action and help detain the man. The group was able to successfully get him under control long enough for the flight to be diverted to Oklahoma City, Oklahoma where police were able to take him into custody. 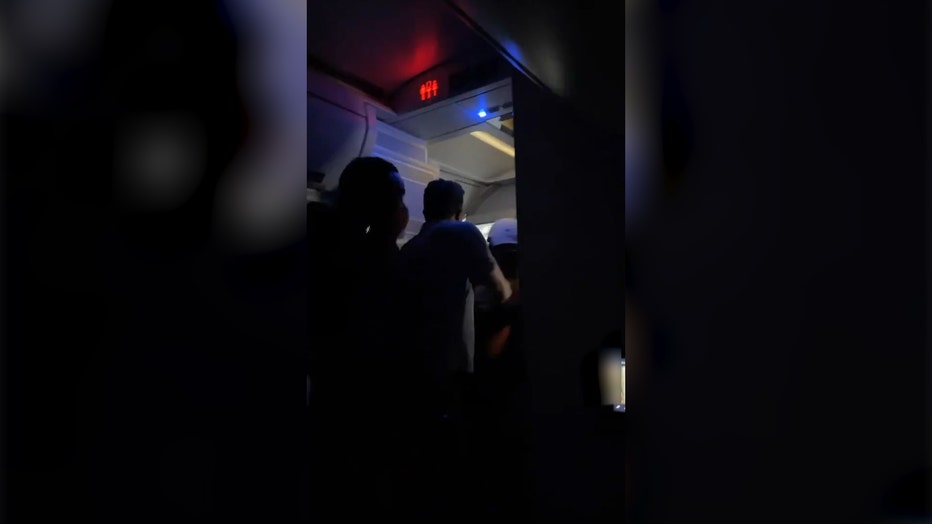 "Thanks to the crew and passengers of Delta Flight 1730 (LAX to ATL) on June 11 who assisted in detaining an unruly passenger as the flight diverted to Oklahoma City (OKC). The aircraft landed without incident and the passenger was removed by law enforcement. We apologize to our customers for the delay and any additional inconvenience," Delta told FOX TV Stations in an emailed statement.

The company confirmed the unruly passenger was not attempting to open the cabin door but was merely positioned in front of the door when he became disruptive.

The investigation into this incident is ongoing, according to Delta.

This incident comes less than two weeks after a would-be hijacker allegedly attempted to breach the cockpit of another Delta flight out of Los Angeles heading to Nashville, Tennessee on June 4.

Crew members were credited with saving the flight after successfully detaining the man, identified as Christian Nolan.

The plane was diverted and made an emergency landing in Albuquerque, New Mexico where law enforcement arrested Nolan.

FOX LA contributed to this report.