JUCHITAN, Mexico  — Life for many has moved outdoors in the quake-shocked city of Juchitan, where a third of the homes are reported uninhabitable and repeated aftershocks have scared people away from many structures still standing.

The city on Sunday was littered with rubble from Thursday night's magnitude 8.1 earthquake, which killed at least 90 people across southern Mexico — at least three dozen of them in Juchitan itself.

Officials in Oaxaca and Chiapas states said thousands of houses and hundreds of schools had been damaged or destroyed. Hundreds of thousands of people were reported to be without water service.

Many people continued to sleep outside, fearful of more collapses, as strong aftershocks continued to rattle the town, including a magnitude 5.2 jolt early Sunday.

Some Juchitecos seeking solace trekked through the destruction to find an open-air Mass on Sunday since many of the churches were either damaged or left vacant until they could be checked. 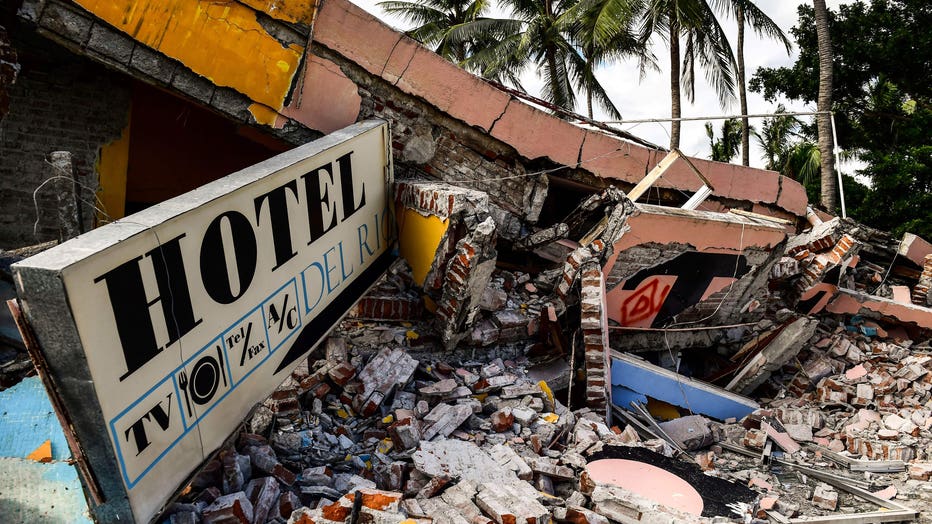 On Sunday evening, Bishop Oscar Campos Contreras conducted Mass for about 200 people at an open-air basketball court next to a collapsed school and in front of the heavily damaged St. Vicente Ferrer church, which lost one bell tower and very nearly the other.

Campos told those gathered that Mass would continue to be held outdoors for the foreseeable future, "because here we feel safer."

Friends and family embraced and cried, overcome with emotion stored for days.

The bishop's homily was part lesson and part pep talk for a community stunned by the destruction.

Yesenia Cruz Jimenez was relieved to hear Mass would be held outdoors. Her house broke apart and her family is still sleeping in the yard, suffering rain and aftershocks.

"There is nowhere safe in town," she said. "It is safer here and people can concentrate better in this place."

Local officials said they had counted nearly 800 aftershocks of all sizes since the big quake, and the U.S. Geological Survey counted nearly 60 with a magnitude of 4.5 or greater.

Oaxaca Gov. Alejandro Murat said Sunday that the death toll in his state had risen to 71, while officials have reported 19 killed in Chiapas and Tabasco states.

Teams of soldiers and federal police with shovels and sledgehammers fanned out across neighborhoods to help demolish damaged buildings. Volunteers, many teens from religious or community groups in surrounding towns that were not as severely hit, turned out in force to distribute water and clothing or lend a hand.

Help was slower to arrive in Union Hidalgo, a town of about 20,000 people about 30 minutes to the east. Collapsed homes pocked neighborhoods there, and the town lacked electricity, water and cellphone service.

Delia Cruz Valencia stood in a puddle-filled street overseeing demolition of what remained of her sister's house next door. Her sister took their mother for medical treatment outside the city before the earthquake and had not been able to make her way back. Men with pry bars ripped away the bottom half of a brick and stucco exterior wall to rescue a large wooden wardrobe because the house was too unstable to access through the door.

Cruz said she was next door with her two daughters when the earthquake struck shortly before midnight Thursday.

"We all three hugged, but even so we were moving. We were pushed from here to there" by the rolling earth, she said.

When she reached the street, she saw a cloud of dust rising from the house her sister shared with their mother. Cruz's great-grandfather had built it a century ago.

"If my sister had been here, she wouldn't have been found alive," Cruz said, choking back tears.

Back in Juchitan, the general hospital has settled into a temporary home at a school gymnasium, with gurneys parked atop the basketball court.

The hospital's regular building was damaged. Maria Teresa Sales Alvarez said it was "chaos" when the earthquake struck the single-story building, but staff moved patients outside and transferred most of those who required specialized care to other facilities.