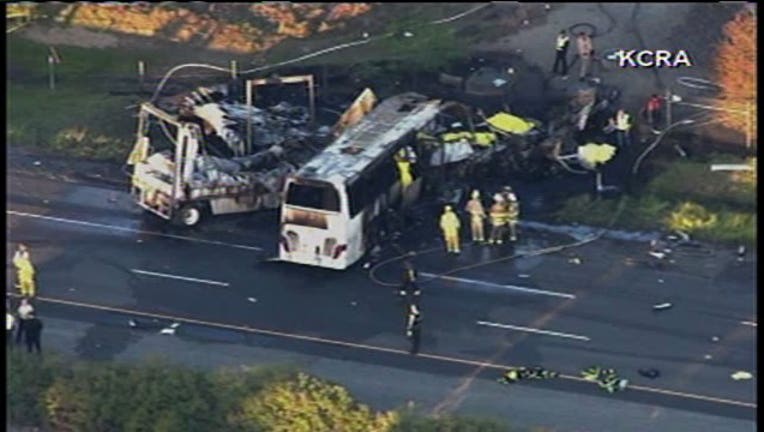 A tour bus carrying students to visit colleges collided with a tractor-trailer in northern California Thursday. At least nine people were killed. (Photo: KCRA-TV via CNN)

ORLAND, Calif. -- The death toll in a head-on collision between a FedEx truck and a bus full of Los Angeles-area high school students rose to 10 early Friday, officials said.

Shortly after 5:30 p.m. Thursday, the FedEx truck crossed the grassy median that separates Interstate 5 here and slammed into the bus packed with students en route to visit Humboldt State University, about 200 miles north of the crash site.

The impact, which witnesses said sounded like a series of explosions, caused both vehicles to burst into flames. The fireball and towering black smoke were captured by the cellphone cameras of others in nearby cars.

Dorsey Griffith, a spokeswoman for UC Davis Medical Center, said one patient who was admitted to the burn unit died late Thursday night. The CHP dispatcher confirmed the 10th fatality occurred at the medical center.

Enloe Medical Center in Chico said it had received a total of 11 patients from the scene and that, as of 2 a.m. Friday, two of the patients were in critical condition. Four were in fair condition, and five had been discharged, the medical center said in a statement, adding that all the admitted patients were passengers on the bus.

Hours after the deadly head-on collision, skid marks from the charter bus stretched nearly 100 yards down the pavement. The hulk of the charred vehicle sat nose down in a ditch, pressed against a mangled small white car.

Marc Smutny, 27, said he was nearby when he heard "probably three explosions" and ran to the scene. “It was insane. The bus was engulfed in flames, smoke in and out of the front,” he said. “The bus looked like it took most of the hit. ... It was horrible.”

The identities of the dead were not immediately known. Company officials confirmed in statements that the bus was operated by Silverado Stages and the truck by FedEx.

Los Angeles Unified Sschool District officials were still scrambling to piece together which students were caught up in the accident.

Although officials said they were aware of students from Robert F. Kennedy Community Schools in Koreatown and Manual Arts High School in South L.A. participating in the trip, which was not organized by L.A. Unified, it was unclear whether they were on the bus.

Los Angeles City Councilman Joe Buscaino wrote on Faceboook and tweeted that two Banning High School students were on the bus but had survived.

“It’s almost impossible to confirm who was on that bus because there were three buses,” said a senior school district official who asked not to be named because he was not authorized to speak.

LAUSD Assistant Supt. Earl Perkins confirmed Thursday night that students from other districts were also on the trip, but said he did not want to release the names of the other school systems, pending confirmation with them.

“We’re still identifying all who were involved, who was on the buses,” Perkins said.

He added that he and other officials intended to stay up all night gathering information and doing what was possible to inform and assist families. “These are our babies,” he said.

In the wake of the crash, uninjured students were brought to the Veterans Memorial Hall in Orland, where the Red Cross set up a shelter.

Volunteers shuttled in and out, serving up water, chips and other food to the students. One grabbed candy to bring inside.

"I'm just trying to think of what they would want if they were home," the volunteer said.

By about 11:30 p.m., some students had already been picked up by family members, said Bob Coombs, a Red Cross volunteer. The remaining students claimed cots inside the hall where they could spend the night.

Steven Clavijo, 18, a student at West Ranch High School in Santa Clarita, told the Associated Press that he was on the bus during the crash. For hours during the long drive north, the students -- from several different schools in the Los Angeles area -- watched movies and listened to hip-hop on the radio, Clavijo said.