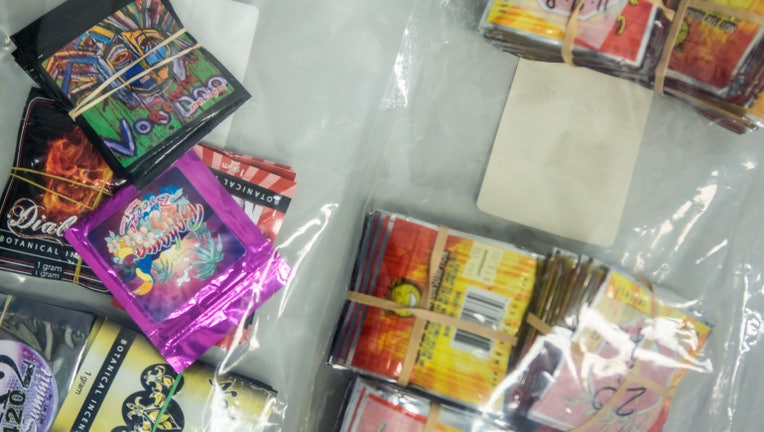 A sample of synthetic drugs. From Getty Images.

GRAND FORKS, N.D. -- Eighteen-year-old Christian Bjerk was a popular high school football player. The middle of Keith and Debbie Bjerk's three sons, he was looking forward to starting at North Dakota State College of Science in the fall of 2012 and playing on the college's football team.

But on the morning of June 11, 2012, Christian was found dead, lying face down on the sidewalk not far from his Grand Forks, North Dakota, home.

"He teared up, and I didn't know what was going on, and he said it's Christian, he's deceased," Keith Bjerk told CNN.

Keith last saw his son the night before as Christian was going out to buy gas. The Bjerks would later learn that their son ran into some teens he knew and went to a house party.

Not far from Christian's body, the police found two disoriented teenagers. One was naked on a bench, the other screaming at parked car. Right away, the police suspected that drugs were involved.

According to Mike Jennings, the detective on call that night, a search of the house where the party was held turned up a white powder, but police couldn't determine what it was.

Days later, another teen was dead, and again, a mysterious white powder was involved. Officers were racing to figure out exactly what these substances were.

Elijah and Justin were hanging out with their cousin's boyfriend, Adam Budge, when according to Justin, he offered them a special treat -- a bag of chocolate he cooked with a white powder. Justin said that Adam told them the powder was an extract from psychedelic mushrooms.

Elijah was nervous, Justin said, because he had never tried psychedelic mushrooms before.

Soon after they ate the bag of laced chocolate, the hallucinations began.

"The trees looked like cauliflowers like dancing around," Justin recalled. "The sidewalks were swooping up and down like a roller coaster, and the grass was shooting up to the sky."

Justin said that he had tried psychedelic mushrooms once before, but he quickly realized this was something different.

Elijah started having a violent reaction to the drug. He was convulsing uncontrollably, foaming at the mouth and hitting his head. By the time the ambulance arrived, Justin said he knew Elijah was gone.

Elijah was brain dead. On June 15, 2012, after three days in the hospital, his family decided to disconnect his life support.

"It was an unusual overdose," said Durrani. "The dilemma was, what has he taken?"

The new world of drug dealing

Elijah's death, the second in two days from a mysterious drug sent shock waves through the community.

It took the state lab a week to identify that the mysterious powders were synthetic designer drugs -- drugs that law enforcement in North Dakota had never heard of before. Elijah and Christian had died from taking these drugs.

"When we learned they were 2C-I-NBOMe, and 2C-C-NBOMe, that was new to us," said Chris Myers, North Dakota's top federal drug prosecutor.

In the past four years, more than 300 synthetic designer drugs with names such as Spice, N-bombe and K2, have flooded into the United States.

"These drugs are being marketed and sold as legal alternatives to marijuana, cocaine, meth and heroin," said John Scherbenske of the DEA.

As states and the federal government race to "schedule" or ban chemical compounds, the manufacturers are staying one step ahead of the law by constantly changing the drugs' chemical composition.

"The chemical companies are altering the compound ever so slightly to avoid our laws here in the United States. Once they alter that chemical, it is no longer a controlled substance," said Scherbenske.

According to the DEA, the majority of the chemical companies manufacturing synthetic drugs are in China. The U.S. government and other Western countries have been putting pressure on the Chinese government to ban certain chemicals and to stop the export of these chemicals worldwide.

In the new world of drug dealing, the chemicals are manufactured overseas, sold online in bulk and imported into the United States, where they are assembled and packaged for resale. These drugs are then labeled as research chemicals, not for human consumption, to avoid prosecution.

Scherbenske said there is no known legitimate purposes for these chemicals.

The drugs that killed Christian and Elijah were not banned by the DEA at the time of their death. The teens' parents had never even heard of 2C-I-NBOME.

"I had to go to the Internet, and look up information on it," said Keith Bjerk. "I didn't really know what it was, I didn't get how dangerous they were."

In North Dakota, law enforcement was trying to track where the new drugs came from and figure out how to get them off the street. The investigation quickly led them to Budge.

"Adam Budge early on in the investigation was the common link the two overdoses," said prosecutor Myers.

According to Myers, Budge, who was 18 at the time, melted the 2C-I-NBOME powder into chocolate that he gave to Elijah, and also sold some of the same drug to Wesley Sweeney, also then 18, who gave it to Christian Bjerk.

Myers said Budge didn't know exactly what the powder was, because he stole it from a drug dealer named Andrew Spofford, 22, who bought it over the Internet from an online company called Motion Resources.

An investigation in motion

Motion Resources founder Charles Carlton started the online company in 2011, when he saw how easy it was to buy psychedelic designer drugs online from overseas.

Carlton said he was using synthetic designer drugs himself when realized that "there was money to be made in distributing them in small quantities."

His website would become a boutique drug dealership for enthusiasts, shipping synthetic drugs all over the country.

Though the company's product mimicked the illegal drug LSD, Carlton said the chemicals he was selling weren't yet banned in the United States. He set up shop in an office building, even registered with the secretary of state, and went to work.

"I was an employee of my own company, getting a W-2, we had full payroll services," said Carlton. "I mean we knew we were walking a very fine line as far as the law was concerned, but at the time, we felt that we were on the right side of it."

Carlton knew that he could be prosecuted if the government proved that he was selling his chemicals for recreational use, so he labeled every package "for analytical and research purposes only."

The product sold itself, Carlton said, and quickly he and his two colleagues were repackaging chemicals they bought in bulk, filling 30 to 40 orders a day and processing was he estimated to be $40,000-$50,000 a month in credit card payments. Motion Resources had customers in all 50 states, and profits were rolling in.

Carlton's business was running for eight months when he saw a story on the news about drug overdoses in Grand Forks, North Dakota. The story featured a shot of a baggie, and Carlton, 28 at the time, said he knew right away that it was his product.

"We had a very special label maker that printed on clear labels," he said. "I was in shock; I didn't want anything like that to happen."

Carlton is the father of two young kids. He said that as a parent, he was stunned, yet he continued to run his business. What Carlton didn't know was that his business partner, Harry George Mickelis, was cooperating with law enforcement.

In Grand Forks, Myers was looking for the source of this deadly batch of designer drugs when he got a phone call that would crack the case.

"Before we heard of Motion Resources, his partner contacted our office through his lawyer and indicated to us that he could explain the entire conspiracy to us," Myers said.

Mickelis would avoid prosecution, and Charles Carlton became the government's prime target. The police search of Carlton's home and office turned up a critical piece of evidence that would seal his fate. It turned out that Carlton kept a journal, documenting his own use of the drugs. It was a kind of a "how to" guide of the drugs he sold.

"That was powerful evidence to show that they knew full well what these substances would do and formed this company to sell them," said Myers.

Carlton decided not to fight and pleaded guilty to three counts: possession with intent to distribute controlled substance analog resulting in death, money laundering conspiracy and misbranding and forfeiture of $385,000.

He first spoke with CNN while awaiting sentencing, facing the possibility of spending the rest of his life in jail. Carlton said he decided to speak up to let as many people know about the dangers of synthetic drugs as possible.

Carlton was the 15th person prosecuted under the North Dakota federal drug case now called Operation Stolen Youth, which began with the deaths of Bjerk and Stai.

"The message that we have sent with this prosecution is that these are dangerous substances," said Myers, who hopes this case will not only raise awareness but also save lives.

Debbie Bjerk has been at most of the hearings and sentencings. She is there to tell the court about her son, to show his photos and to play a video of him dressed in his uniform on the football field. She was at the federal courthouse on August 28 for Carlton's sentencing.

At 30, Carlton was sentenced to 20 years in federal prison for the deaths of Elijah Stai and Debbie and Keith's son Christian. For the Bjerks, this case will never be over.

"It's never going to be done. Christian was -- he was a child, he was our flesh and blood, he was someone who was so important to us that we would've given our lives for him," Keith Bjerk said. "It is now our job to get the word out there to the rest of the people so that no other families have to go through this kind of thing and to honor our son."

Since their son's death, the Bjerks have become activists, getting the word out on the dangers of synthetic drugs. Thanks to their efforts, North Dakota has put in new legislation banning a number of synthetics. And federally, the drug that killed the teens is now on the list of DEA scheduled substances.

Elijah's family members say they hope his death will be a warning to others about the dangers of synthetic designer drugs.

"I want other parents to know what their kids are doing," said Melissa Katz, Elijah's mom. "You should always know what your kids are doing on the computer, online, with their friends. ... This can happen to any family."