SEATTLE  — Hundreds of demonstrators and counter-protesters converged in downtown Seattle one day after violent clashes in Charlottesville, Virginia.

The rally organized by the conservative pro-Trump group known as Patriot Prayer — and a counter protest aimed at standing against hate — were previously planned for Sunday.

Hundreds of people carrying signs opposing hate and the KKK and showing support for Charlottesville marched to downtown Seattle where Patriot Prayer was gathered for a rally it billed as in support of freedom and free speech.

The pro-Trump group has held similar events throughout the Pacific Northwest and they have been met by counter protests.

A barricade separated the groups of protesters in downtown Seattle. Police officers stood by dressed in black, riot gear.

The Seattle Times reported that officers used pepper spray on some marchers.

Mike O'Brien said he joined Sunday's march to stand in solidarity against the violence and racism in Charlottesville over the weekend.

He walked with other peaceful protesters toward Westlake Park, where the Patriot Prayer group was holding a rally. But officers blocked their route several times. 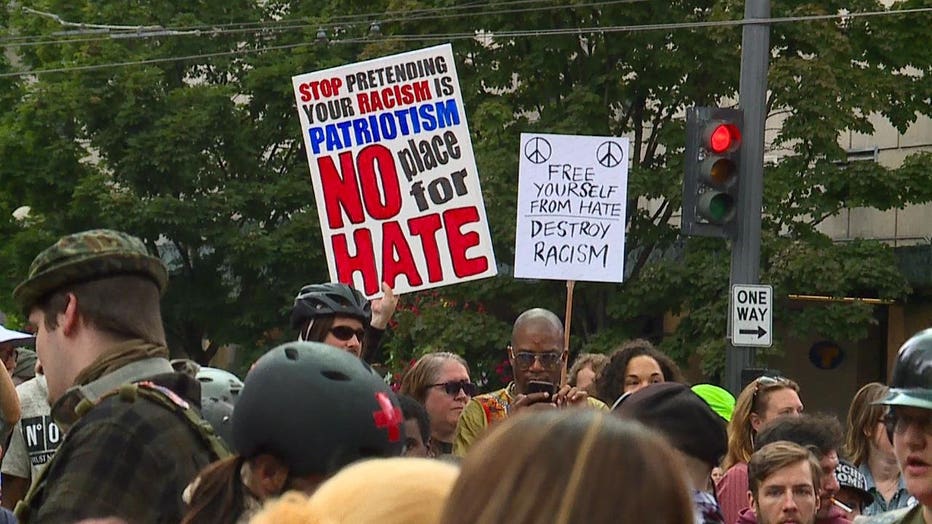 O'Brien said texted Seattle Police Chief Kathleen O'Toole in the middle of the march and she told him demonstrators would not be allowed to proceed to Westlake Park.

O'Brien says he and other counter protesters returned to Denny Park north of downtown.