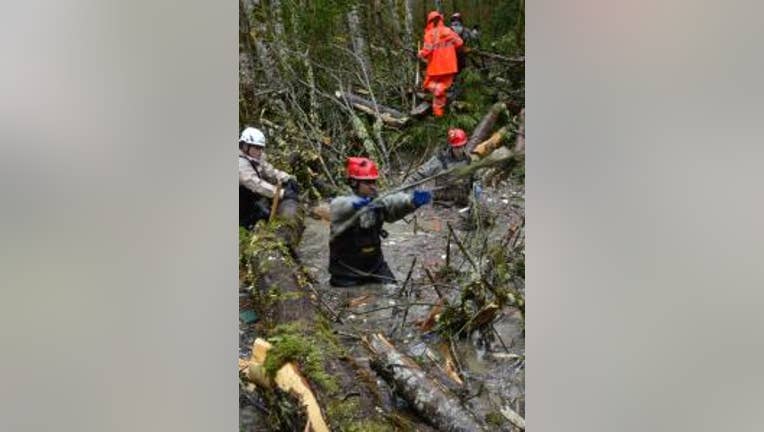 ARLINGTON - It’s been eight days since the mudslide on Highway 530. Despite the fact, crews have been working around the clock, they say they’re nowhere close to clearing the massive amounts of debris.

“At some points, it’s 70 to 80 feet deep from where it used to be,” says Lt. Richard Burke of the Bellevue Fire Department. “It’s just an incredible amount of material.”

But Governor Jay Inslee, who took an aerial tour of the disaster zone earlier this week, said what he saw from the air today showed real progress.

There are more than 600 people involved in the search effort, including more than a hundred national guardsmen. An additional fatality recovery team flew in from Colorado last night.

“Our guys have been working 14 hours a day for a week,” said Major General Bret Daugherty of the Washington National Guard. “They’re processing remains, which is absolutely difficult work. So the Colorado guys have come in to give my guys a little bit of a breather, so we can get some shift work going in that very challenging arena.”

Making sure crews don’t get sick is another concern. From sewage to chemicals, the mud is laced with contaminants. So searchers are taking extra precautions when it comes to cleaning up.

Four more bodies were found today, but the governor says he’s not giving up hope that there are still survivors.

“The crews continue to locate property,” says Jason Biermann, with the Snohomish County Department of Emergency Management. “They’re putting memorabilia and personal items in plastic bags and taking them off site where they’re decontaminated.”

Special care is being taken to make sure they can eventually be returned to those who have already lost so much. It’s just one of the ways crews hope they can make a difference.

“The town of Oso and the people that have been lost, their family is huge now,” says Lt. Burke. “Because every firefighter, every volunteer is out here for one cause and that’s to support this community.”