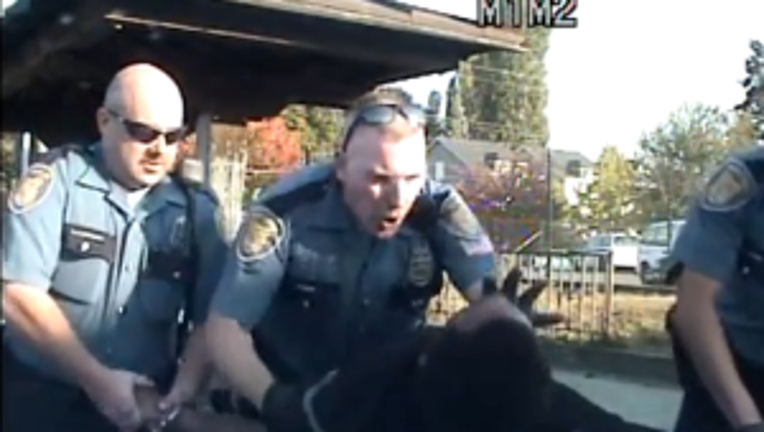 SEATTLE -- A controversial video of a Seattle police officer punching a man during an arrest was released Tuesday.

The video comes a day after a local lawyer filed suit against Seattle's police chief, saying the department was keeping "explosive pictures" of police beating his client, Leo Etherly, from the public.

The video stems from an Oct. 6 incident when police were on the hunt for a hit-and-run suspect. Police thought Etherly was the man responsible for the hit-and-run after they say they got a match on his license plates.

What happened next led to accusations  of excessive force.

“This is so far afield from appropriate policing that it should cause concern for all of us,” said Etherly’s attorney, James Egan. Egan filed a suit against the police department on Monday for not releasing the dash-cam video to him through the Public Records Act.

The department released the video Tuesday, partly in hopes of stemming the tide of negative publicity surrounding the video.

“We think it's a reaction to the public interest and our commitment to being more transparent, more open,” said Seattle Police Sgt. Sean Whitcomb.

Whitcomb also said the video clearly shows that Etherly was uncooperative and resisting arrest. In the footage, it appears he is held down by his chin or neck. Etherly claims he was being choked.

“If you're breathing your own saliva, you're going to have a reaction,” said Egan. “He did not intentionally spit on the officer.”

But when he did spit, the officer responded by punching him and taking him down to the ground. Egan said Etherly now has permanent, partial blindness in one eye.

Etherly has not been charged with a crime. Detectives are still investigating the case. Seattle police won't say if the officer used reasonable force. The case is being sent to the Office of Professional Accountability to decide.

Etherly's lawyer said accountability is the reason he wanted the dash-cam video shown to the public in the first place.

“That's my beef, that in some cases we're getting officers that are reckless and cause injury,” Egan said.