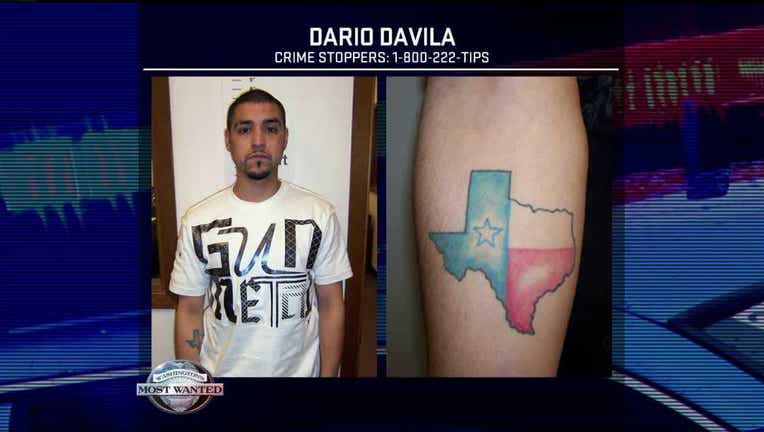 FUGITIVE CAPTURED Jan. 2, 2013 -- The Department of Corrections says it was a Washington' Most Wanted viewer tip called into Yakima County Crime Stoppers that led the DOC's Violent Crimes Task Force to Dario Davila on January 2nd. FUGITIVE WANTED IN YAKIMA COUNTY Dec. 21, 2012 -- Cops say a drug-fueled, woman abusing, gang member who is sporting a tattoo of the great state of Texas is on the run right now in Yakima County. Missing high-violent offender, Dario Davila's got a hefty rap sheet that includes assault, drugs and a domestic violence attack. He broke his probation and that's why he's wanted now. Dario Davila is 28-years-old and most likely in the Yakima area. In addition to his Texas state tattoo, he also has a lot of ink on his chest. Officers said his mixture of meth and gangs definitely makes him a risk to law enforcement and the community. If you spot this missing high-violent offender, call an anonymous tip into: CRIME STOPPERS: 1-800-222-TIPS You must call the Crime Stoppers hotline with your tip to be eligible to receive a cash reward for information leading to a fugitive’s arrest. CLICK HERE for information on how to TEXT A TIP to Crime Stoppers