The woman killed is Daria Dugina, the daughter of political theorist Alexander Dugin, a prominent proponent of the "Russian world" concept and a vehement supporter of Russia's sending of troops into Ukraine.

MOSCOW - The daughter of an influential Russian political theorist often referred to as "Putin’s brain" was killed in a car bombing on the outskirts of Moscow, authorities said Sunday.

The Moscow branch of the Russian Investigative Committee said preliminary information indicated 29-year-old TV commentator Daria Dugina was killed by an explosive planted in the SUV she was driving Saturday night.

There was no immediate claim of responsibility. But the bloodshed gave rise to suspicions that the intended target was her father, Alexander Dugin, a nationalist philosopher and writer.

Dugin is a prominent proponent of the "Russian world" concept, a spiritual and political ideology that emphasizes traditional values, the restoration of Russia’s power and the unity of all ethnic Russians throughout the world. He is also a vehement supporter of Russian President Vladimir Putin's move sending troops into Ukraine.

The explosion took place as his daughter was returning from a cultural festival she had attended with him. Russian media reports cited witnesses as saying the SUV belonged to Dugin and that he had decided at the last minute to travel in another vehicle.

The car bombing, unusual for Moscow, is likely to aggravate tensions between Russia and Ukraine. 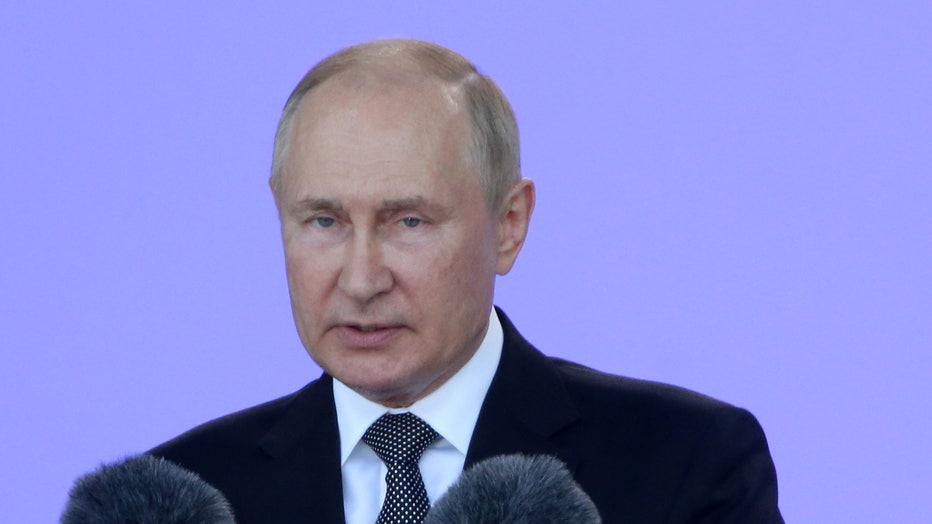 Russian President Vladimir Putin speaks during the opening ceremony of the International Military Technical Forum 'Army 2022', on August,15, 2022, in Kubinka, outside of Moscow, Russia. (Photo by Contributor/Getty Images)

Denis Pushilin, president of the separatist Donetsk People’s Republic, the pro-Moscow region that is a focus of Russia’s fighting in Ukraine, blamed the blast on "terrorists of the Ukrainian regime, trying to kill Alexander Dugin."

Mykhailo Podolyak, an adviser to Ukrainian President Volodymyr Zelenskyy, denied Ukrainian involvement, saying, "We are not a criminal state, unlike Russia, and definitely not a terrorist state."

Political analyst Abbas Gallyamov, a former speechwriter for Putin, called the attack "an act of intimidation" aimed at Kremlin loyalists.

To them, he said, "this is a symbolic act, demonstrating that hostilities have been confidently transferred to the territory of Russia, which means that this is no longer an abstract war that you watch on TV," he said. "This is already happening in Russia. Not only Crimea is being bombed, but terrorist attacks are already being carried out in the Moscow region."

While Dugin's exact ties to Putin are unclear, the Kremlin frequently echoes rhetoric from his writings and appearances on Russian state TV. He helped popularize the "Novorossiya," or "New Russia" concept that Russia used to justify the 2014 annexation of Ukraine's Crimean Peninsula and its support of separatist rebels in eastern Ukraine.

RELATED: Putin ready to arm Russia's allies with 'most advanced types of weapons'

He promotes Russia as a country of piety, traditional values and authoritarian leadership, and disdains Western liberal values.

His daughter expressed similar views and had appeared as a commentator on the nationalist TV channel Tsargrad, where Dugin had served as chief editor.

Dugina herself was sanctioned by the United States in March for her work as chief editor of United World International, a website that the U.S. described as a disinformation source. The sanctions announcement cited a United World article this year that contended Ukraine would "perish" if it were admitted to NATO.

RELATED: Russia to drop out of International Space Station after 2024 and build own outpost

In an appearance on Russian television just Thursday, Dugina said, "People in the West are living in a dream, in a dream given to them by global hegemony." She called America "a zombie society" in which people opposed Russia but could not find it on a map.

Dugina, "like her father, has always been at the forefront of confrontation with the West," Tsargrad said Sunday.

An unknown Russian group, the National Republican Army, claimed responsibility Sunday for the bombing, according to a former Russian lawmaker, Ilya Ponomarev. The AP could not verify the existence of the group or its claim. Ponomarev, who left Russia after voting against its annexation of Crimea in 2014, made the statement to Ukrainian TV.